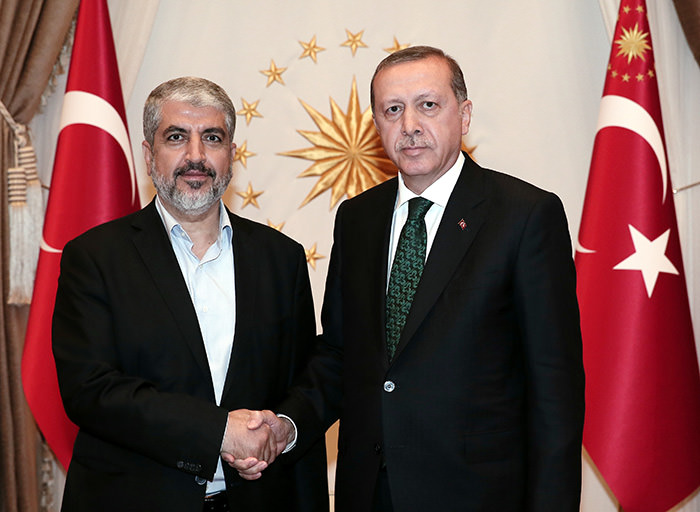 After the one-hour closed-door meeting at the Presidential Palace in Ankara, an official statement released from the organization described the meeting as "positive and fruitful." The statement said: "[Mashaal] expressed his interest in the Turkish president's support for the Palestinian cause and the Palestinian people."

This was the second meeting between Erdoğan and Mashaal this year, as the two met earlier when Mashaal was invited to attend a conference held by the then ruling Justice and Development Party (AK Party).

Following the meeting, Mashaal was received by Prime Minister Ahmet Davutoğlu and they held a two-and-a-half hour meeting at the Prime Ministerial Residence.

On a television broadcast on Thursday Foreign Minister Mevlüt Çavuşoğlu emphasized the necessity of continuing the Palestinian unity government, and said: "There is no solution in the Middle East without Hamas. We have been defending this for years. When we invited Hamas to Turkey for the first time it made a great fuss. We have been giving the message to them that they should drop their arms and participate in the political process. All countries in the world have reached the same point today."

Çavuşoğlu brought up the latest issue of the $200 million of aid for Gaza and said: "There is huge destruction in Gaza and we held several meetings for helping them."

Before his visit to Ankara, Mashaal had paid a rare visit to Saudi Arabia and held a meeting with Saudi King Salman after his meeting following Iran's nuclear deal with world powers. The Huffington Post's Arabic weekend edition, said this surprising visit caused Iran, which does not have good relations with Saudi Arabia regarding Sunni-Shiite conflicts in the region, to cancel the scheduled visit by a Hamas delegation to the country.

Previously on Tuesday, Iranian Minister of Foreign Affairs Mohamed Javad Zarif's visit to Ankara was postponed without a future date set due to President Recep Tayyip Erdoğan not giving an official appointment. Sources said that Erdoğan's decision is based on Iranian officials' ignoring Ankara's warning and insisting in a smear campaign that Turkey is supporting the Islamic State of Iraq and al-Sham (ISIS) and "hostile" statements about Turkey regarding the fight against the PKK.

As the crisis in Syria erupted in 2011, Hamas refused to openly support Syrian President Bashar Assad's regime against the opposition forces, which is mostly Sunni. Hamas's neutral attitude caused all members to be forced to leave the country in 2012, which had once been a shelter for the organization, and Iran cutting off its financial support, which had been around $23 million a month.
Last Update: Aug 13, 2015 5:49 pm
RELATED TOPICS