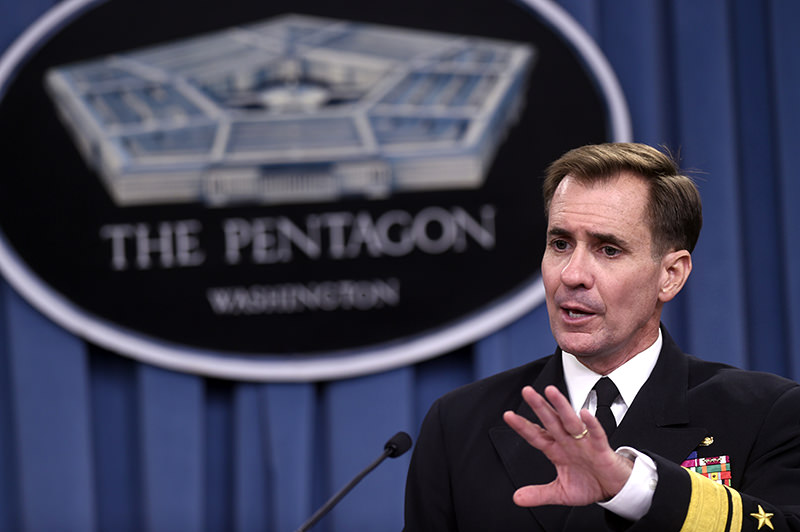 by Anadolu Agency Aug 25, 2015 12:00 am
The U.S. State Department spokesman John Kirby Monday lashed out at criticism of Turkey lagging behind in its efforts as a member of the anti-ISIS coalition.

"They've allowed us to use airbases now. They're going to soon be flying in the coalition air tasking order, you know, inside the coalition planning cycle for air ops, and yet I continue to get questions up here, that you know, why they aren't doing more; why aren't they doing enough," Kirby said.

The spokesman's comments came during a press briefing when a reporter asked whether the state department is content with Turkey's efforts, unlike the Secretary of Defense Ash Carter who said last week that Turkey should do more against ISIS.

Kirby made it clear that there is not a different approach between the Defense and State Departments in that respect, noting that he found it "interesting" that the discussions around Turkey's efforts continue, despite its efforts.

"Here's a nation that has two million refugees that it's taking care of inside Syria. Significant security concerns of their own, a foreign terrorist group, like the PKK, continues to attack them, as we saw throughout the weekend," he added, referring to ongoing killing of Turkish security personnel in PKK attacks.

Kirby also noted that all coalition members can do better, including the United States, but, he added, as "a coalition of the willing" all members of it are dedicated to the fight against a resilient enemy like ISIS.

"You contribute what you can, where you can, when you can, and you spend as much money as you can. And maybe you shed as much blood as you can. Those are sovereign decisions that members of a coalition have to meet and make for themselves, in accordance for the desires of their government and their people. And the Turks are doing that," he said.

On July 24 Turkey declared it would open its İncirlik Air Base in southern Adana province for coalition aircraft, and beginning from early August the coalition started to use the base in air operations targeting ISIS in Iraq and Syria.

Turkey and the U.S. are also about to finalize an agreement on the technical details for Turkey's inclusion in counter-ISIS air campaign.

Also, Turkish jets have conducted several airstrikes on ISIS targets inside Syria over last few weeks while Turkish police at home have conducted raids on people allegedly linked to the terror group.