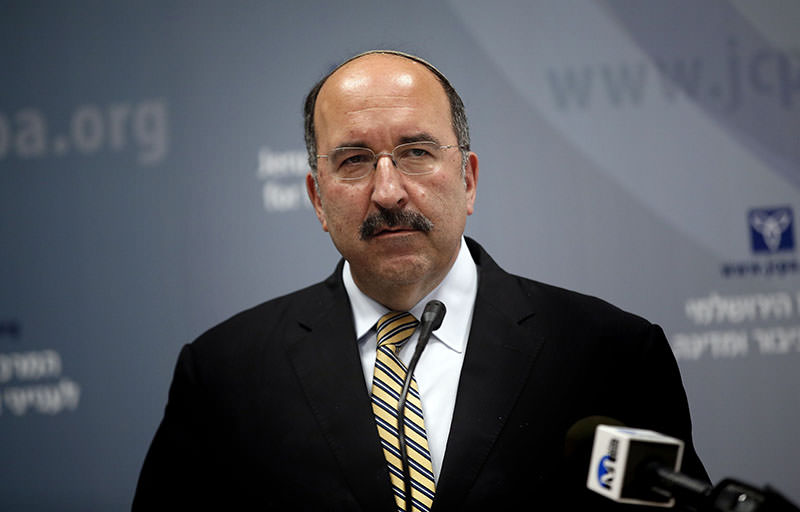 Israeli director general of foreign affairs, Dore Gold, delivers a speech on June 1, 2015, in Jerusalem (AFP Photo).
by Daily Sabah Aug 28, 2015 12:00 am
Israeli Foreign Ministry Director-General Dore Gold has said that he is "hopeful that in the not too distant future Israel and Turkey will find a way to re-establish their relationship."

Speaking to the Jerusalem Post on Thursday, Gold, who held secret talks in Rome in June with his Turkish counterpart, Feridun Sinirlioğlu, claimed that regional developments and challenges are compelling Ankara to make some changes of its own. "The strategic environment around Turkey is much more complicated than it was two or three years ago, with the rise of ISIS [Islamic State of Iraq and al-Sham] as a challenge to Turkey, not just Syria, and the growth of Iranian power, which is not just a problem for Israel, but for Turkey as well," Gold said.

Asked why the two countries have not reconciled if indeed the situation facing Turkey today is much more difficult than it was at the time of the Mavi Marmara raid in 2010 that led to a rupture in the ties, Gold responded: "Everything takes time." Israeli forces raided the Turkish humanitarian aid ship and killed 10 activists en route to Gaza in international waters.

As to whether he thinks that Israel could ever re-establish relations with Turkey with President Recep Tayyip Erdoğan at the country's helm, Gold replied: "I think countries ultimately operate according to their interests, and I think Turkey and Israel do have important converging interests." Gold is expected to meet with a delegation of senior Turkish journalists the ministry is bringing to Israel next week.

A critical step to establishing reconciliation between Turkey and Israel was taken with a secret meeting held in Rome. In the meeting that came years after the deadly attack on the Mavi Marmara, three conditions from Turkey were brought to the table once again during the talks, which are removing the blockade of Gaza, Israeli Prime Minister Benjamin Netanyahu's apology to Turkey and compensation to the families of those who lost their lives in the attack.

Netanyahu apologized to Erdoğan with the mediation of U.S. President Barack Obama. A formula to agree over the other two conditions has been found as Israel will provide convenience for goods-carrying to Gaza and it will not prevent medicine and humanitarian aid from reaching Gaza. Over compensation, both countries reportedly agreed, although no definite information has been given over the amount.

Diplomatic sources claimed that both countries are close to a compromise on these conditions and when representatives from both sides come to terms on the draft agreement, it will be handed to the countries' governments to receive approval. They also added that the secret meeting in Rome was not the first one as representatives from the two countries convened before to discuss ways to mend ties. Reportedly, there may be more summits if either government demands a change in the draft.

The Mavi Marmara attack that froze ties between the countries happened when a second flotilla organized by the international Free Gaza Movement and Turkish nongovernmental organization Humanitarian Relief Foundation (IHH) and known as the Gaza Freedom Flotilla, was raided by Israeli forces in international waters in 2010. Ten were killed and 55 were wounded in the attack on the flotilla's main ship, the Mavi Marmara. In March 2013, Netanyahu expressed his regret for the Mavi Marmara killings over the phone next to Obama, who brokered the deal. Even though the phone conversation opened a door to negotiations, they later stalled. Israel agreed to increase reparations for the victims to $20 million and a draft of an agreement between the two states was written in February 2014.
Last Update: Aug 29, 2015 4:55 pm
RELATED TOPICS