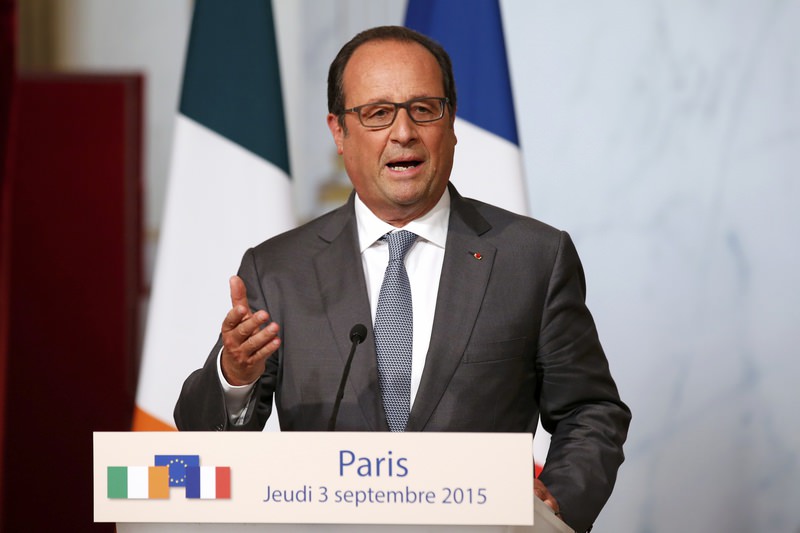 by Daily Sabah with Agencies Sep 03, 2015 12:00 am
French President François Hollande has phoned President Recep Tayyip Erdoğan after the images of a drowned Syrian toddler on a Turkish beach emerged in the world media, prompting sympathy and outrage at the inaction of developed nations in helping refugees.

Speaking at a joint press conference Irish Prime Minister Enda Kenny on Thursday, Hollande said that Europe needs a policy on migration that is fair and humane and the refugee crisis can be solved with an joint initiative launched by France and Germany.

Hollande said that he called President Erdoğan and some European leaders after the images were circulated in the media and told the leaders that the picture must be a reminder of the world's responsibility against refugees.

"If the picture went viral around the world, it must also get a round of responsibilities... I think about all the victims that are never photographed, and the future victims if we do nothing," the French leader added.

The two leaders agreed that all countries and specifically the European Union should take the necessary steps to tackle the crisis.

Hollande said that France would help Turkey more for the refugees and praised Turkey's assistance for the migrants especially for those coming from Syria, the sources said.

Erdoğan, in his part, said that Turkey expected the international community to do its part for the crisis, reminding that his country hosted about 2 million Syrian and Iraqi refugees.

Hollande also announced that he and German Chancellor Angela Merkel are proposing a series of measures to deal with Europe's migrant crisis.

Saying that some European countries had failed to "assume their moral burdens", French President Francois Hollande said he had agreed with German Chancellor Angela Merkel on "a permanent and obligatory mechanism" to allocate refugees across the bloc.

"I believe that today what exists is no longer enough," he said. "So, we will need to go further."

Politicians across the continent acknowledged the impact on Thursday of images of a 3-year-old boy in a red T-shirt and tiny sneakers face down in the surf of a Turkish beach, which gave a haunting human face to the tragedy of thousands dead at sea.

The boy's 5-year-old brother Galip and 35-year-old mother Rehan were also among the 12 people who died when two boats carrying 23 capsized while trying to reach a Greek island.