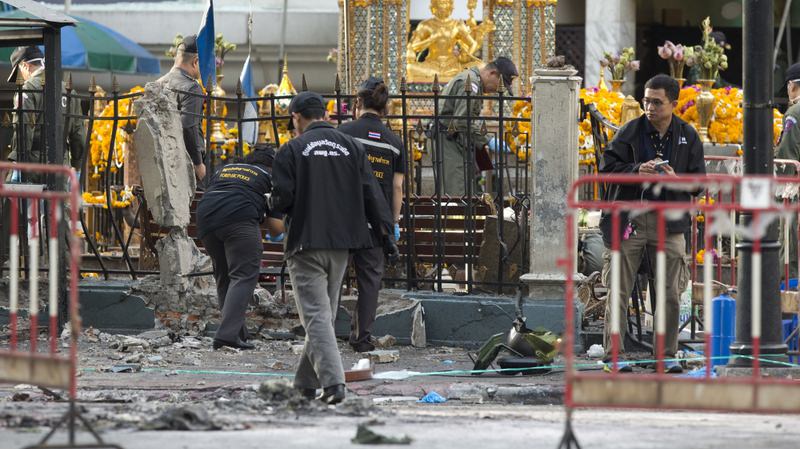 by Daily Sabah with AP
Sep 14, 2015 12:00 am
A senior Turkish government official denied on Monday that a key suspect in last month's bombing at a Bangkok shrine which killed 20 people had fled to Turkey.

The Thailand police had claimed that the 27-year-old suspect named Abudureheman Abudusataer had escaped to Turkey, but the Turkish official stated that there was 'no record of the suspect having entered Turkey', in an email on condition of anonymity in line with office policy.

"Despite our demands, the Thai authorities have not informed us that a terrorism suspect was traveling to Turkey," added the official. The official also said that tens of counterfeit passports related to the incident have been found, underlining the double standards of media when writing news on Turkey. "Our extensive research and findings show that the bomber has not traveled to Turkey after the incident," he added.

Thai police had previously said the man, carrying a Chinese passport in the name Abudureheman Abudusataer, may have directed the Aug. 17 bombing of the Erawan Shrine. Investigations revealed that he left Thailand on Aug. 16 for Bangladesh, and police speculated that he might have gone to China.

However, national police spokesman Prawut Thavornsiri said that information gathered by Thai police and Bangladeshi officials showed that the man departed Bangladesh's capital, Dhaka, on Aug. 30 and traveled to Istanbul in Turkey as his final destination, via New Delhi and Abu Dhabi.

After weeks of demurring, Thailand has suggested that those behind the blast may have been from a gang involved in smuggling Uighurs. But others speculate they may be separatists or extremists angry that Thailand repatriated more than 100 Uighurs to China in July.

Meanwhile, the Turkish connection boosted a theory the suspects may be part of a group seeking to avenge Thailand's forced repatriation of ethnic Uighurs to China in July.

The Turkish Embassy in Thailand also previously questioned the reports claiming that its nationals were involved in the Aug. 17 bombing of Bangkok that killed 20 people.

A statement posted in early September on the embassy's website said it has not received any official notification from Thai authorities concerning arrest warrants issued for at least three persons believed to Turkish nationals. It also quotes a Turkish Foreign Ministry spokesman noting that the embassy has stated that a suspect arrested with a fake Turkish passport is not Turkish.

On the Thai front, security officials on Sunday continued the works to identify the members of the network believed responsible for the bombing and police raided an apartment that was suspected of having links to a bombing suspect. Police said no bomb-making materials were found in the apartment, which is in a building that serves as a hostel for women. Thai media reported that the two women tenants and a guest were taken away for questioning.

Two other key suspects are also in custody, charged with possession of illegal explosives. One of them was captured from an apartment on the outskirts of Bangkok where police also discovered bomb-making material. The other was caught near the border between Thailand and Cambodia, and police said his fingerprints were found on a container with explosive material confiscated from the apartment.

Also Monday, Malaysia's police chief announced that a Pakistani and two Malaysians have been detained in connection with the Bangkok bombing.

Inspector General Khalid Abu Bakar told reporters that the three were detained a few days ago following a tip-off by Thai authorities. He said one of the Malaysians is a woman.

Among those who died in the blast were five Malaysians from one family. Many of the victims were foreigners as the shrine is a popular destination for tourists and Thais alike.

Khalid did not give details or say where in Malaysia the three were detained, when they will be formally charged, or what the charges would be. He said Malaysian police will investigate and work with Thai authorities on the detainees.

Thai police say the man who may have actually planted the bomb may have fled across Thailand's southern border to Malaysia, but Khalid refused to speculate on that.

Prawut, the Thai police spokesman, said his department had told the Malaysians that some suspects might have escaped to Malaysia.

Malaysian police then investigated and arrested suspects who are allegedly involved in illegal human smuggling and they might have some information, Prawut said.

"However, we haven't had any confirmation. ... As a preliminary step, they have arrested suspects who are allegedly involved in illegal human smuggling. Whether they are involved in our bombing incident or not we will have to wait and see," he said.