The cause behind Syrian refugee crisis needs to be eradicated, Turkey's foreign minister says 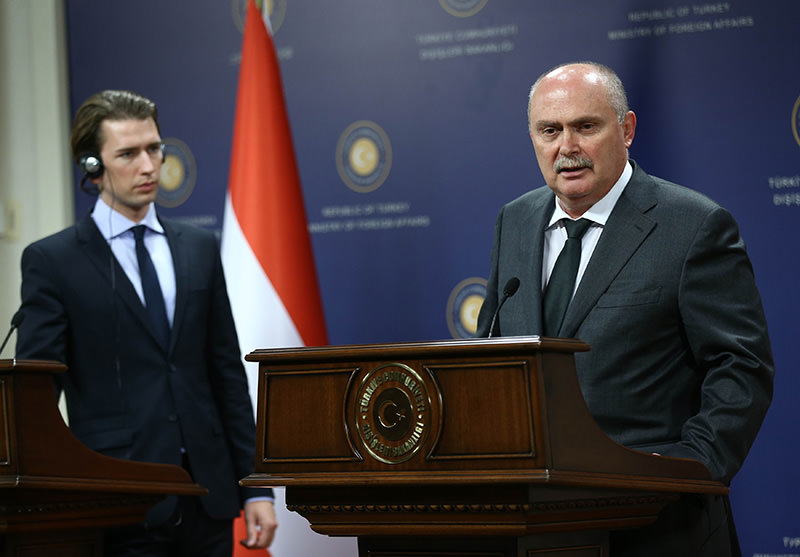 Turkey's Foreign Minister Feridun Sinirlioglu (Right) and Austria's Minister for Foreign Affairs Sebastian Kurz (Left) in a joint press conference with in Ankara, on September 19, 2015 (AFP Photo)
by Anadolu Agency Sep 19, 2015 12:00 am
Turkey cannot prevent all Syrian refugees from risking their lives in order to cross into Europe and the cause behind the problem should be eradicated Foreign Minister Feridun Sinirlioğlu said on Saturday.

"We cannot solve this problem through security precautions. Turkey, of course, will take every security measure but we need to eradicate the causes of this problem," Sinirlioğlu told a press conference in Ankara alongside his Austrian counterpart, Sebastian Kurz.

Turkey hosts the highest number of refugees in the world. According to the UN, there are 1.9 million Syrian refugees registered in Turkey alone as of Aug. 25.

Sinirlioğlu also said that Turkey had saved more than 50,000 people from being drowned in the Aegean Sea.

During the press meeting, Kurz voiced his support for the creation of safe zone inside Syria.

In the face of the ongoing refugee crisis in Europe, Austria reintroduced border checks in an attempt to manage the crisis.

Europe, which is facing what is being described as the worst refugee crisis in the continent since the World War II, recently decided to accept up to 140,000 refugees.

The Turkish foreign minister ruled out Syrian President Bashar Al-Assad being part of a political solution to the five-year-old civil war which has left tens of thousands of people dead and millions displaced.

"Assad is the source of all these problems. A tyrant who declared war on his people cannot take a part in the political solution," Sinirlioğlu said.
Last Update: Sep 19, 2015 5:48 pm
RELATED TOPICS