No one sees a better future for Syria with a dictator who killed over 300.000: President Erdoğan 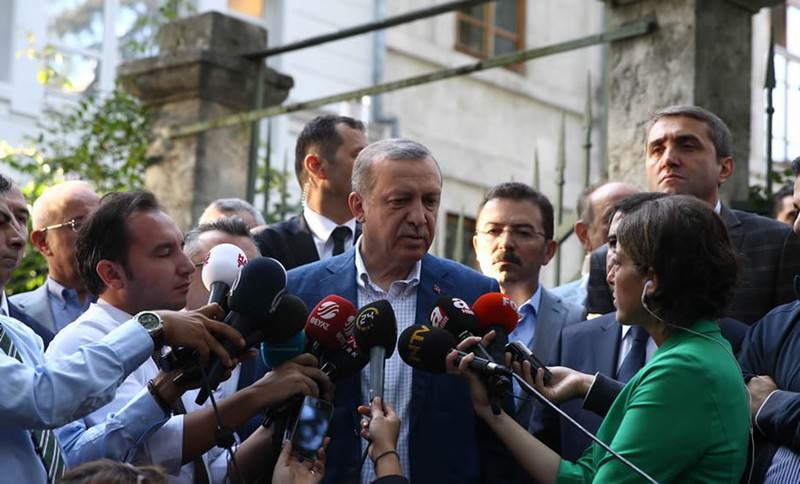 In the remarks he made after the Eid al-Adha prayer, President Erdoğan emphasized the importance of contribution by the states of the region to end the bloody war in Syria and the oppressive Assad regime. The President also added that Turkey wants to collaborate with key countries for a solution at Foreign Ministerial level

President Recep Tayyip Erdoğan made a statement after performing the Eid al-Adha prayer in Istanbul early Thursday, in which he presented assessments regarding the developments in Syria and a possible transition period for the country.

"A transition period without or maybe with Assad can be possible. Nevertheless, the best option is a solution without Assad as no one sees a better future for Syria while under such a dictator who caused the deaths of over 300,000 civilians," he said.

After performing the prayer in Hamid-i Evvel Mosque in Istanbul's Emirgan district, he said that he discussed the recent developments in Syria and the region with Russian President Vladimir Putin in Wednesday's meeting.

"We had a working dinner during which we discussed bilateral relations between Russia and Turkey, especially on the grounds of economy and culture. I don't think that Russia's stance on Syria is clear yet. Nevertheless, we have decided to start negotiations regarding the issue at Foreign Ministerial level," said the President.

"We have the United Nations General Assembly ahead of us. We have decided to start trilateral negotiations at Foreign Ministerial level between the United States, Russia and Turkey. Should Iran and Saudi Arabia want to join the negotiations, we will collaborate with them and continue the negotiations together," Erdoğan added, further emphasizing the fact that the European Union and countries of the region such as Jordan and Qatar may also contribute to the work.

Adding that the people of Syria seem to want Assad gone too, he said that it's no longer a secret that Iran and Russia support the regime. "We wish that Russia will collaborate with us on the issue. I told Mr. Putin yesterday that Assad wants to build a 'boutique' Syria which is made of 15 percent of the total Syrian territory and comprises of Damascus, Hama, Homs and Latakia. Assad wants to build a small Mediterranean state which is backed by several global powers," the President further added.