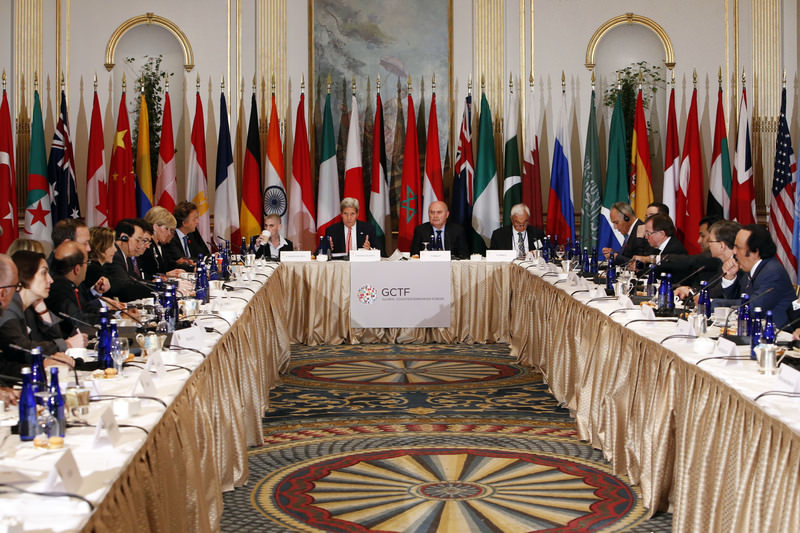 by Daily Sabah with AA Sep 27, 2015 12:00 am
Turkey is fighting not only one but three fronts against the terrorist organizations which have regional and international roots, Turkish Foreign Minister Feridun Sinirlioğlu on Sunday.

Sinirlioğlu's remarks came as he co-chaired a ministerial meeting of the Global Counterterrorism Forum in New York with U.S. Secretary of State John Kerry.

"Turkey stands at the forefront of the terror threat. For decades now, we have raced against all manner of terrorism, driven by all manner of twisted ideologies. As many struggle to learn just the acronyms, let alone apprehend – comprehend the changing motives, tactics, and cause of the many faces of terror, Turkey is once again in the trenches fighting on not one but three fronts, whether it is from revolutionary left in the form of DHKP/C, ethnic separatists as with PKK, or those exploiting religion like al-Qaida, ISIS, or al-Nusrah." Sinirlioğlu said.

A recent rise in terrorist attacks on Turkey followed the July 20 Suruç massacre in Şanlıurfa province. Turkey responded by launching airstrikes and other counter-terrorism operations against the groups.

"The onslaught has been virtually relentless, and we have suffered for it. The threat was never solely home grown. Driven in no small part by our geographic location, it had complex and stubborn regional and international roots," the Turkish foreign minister said.

"This struggle is taking its toll, not just in terms of direct damage inflicted socially, politically and economically, but also in terms of its by-products, like the ever growing refugee crisis fueled by the chaos in our immediate vicinity," he added.

For his part, Kerry said: "We cannot just keep donating to take care of refugees. We have to prevent the refugees from having to be refugees, from having to leave their homes, leave behind their children."

Referring to conflicts and crises occurring in the Middle East, including atrocities committed by ISIS, he said: "The world is looking at this and wondering whether the institutions that have been created for so long to deal with this kind of issues are going to come together and function."

"There is no place for indifference at this moment for any nation that has signed up to rule of law and global responsibilities," the U.S. top diplomat added.

"This week is a critical week for all of us to come together and find a way to restore people's confidence that the international community will step up and do what is necessary," Kerry said, referring to the ongoing UN General Assembly meetings in New York, which saw attendance from more than 140 world leaders.

"To defeat terrorism, we have to act globally and locally," he added.

The region is facing its biggest refugee crisis in decades, with thousands of asylum seekers from Middle Eastern and African countries trying to flee war and persecution.

The majority of these asylum seekers are Syrian refugees who are trying to flee a civil war that has claimed more than 250,000 lives since 2011 and created a security vacuum that paved the way for extremist groups such as ISIS to gain a foothold in the region.

The UN refugee agency says 95 percent of the latest million Syrian refugees have gone to Turkey, which has become the world's largest refugee hosting country. It is hosting more than 1.9 million registered Syrian refugees.

The Global Counterterrorism Forum was launched in 2011 to strengthen international cooperation to address civilian-focused counter-terrorism priorities. It has 30 members, including the U.S., Turkey, Britain and the EU.
Last Update: Sep 28, 2015 1:32 am
RELATED TOPICS