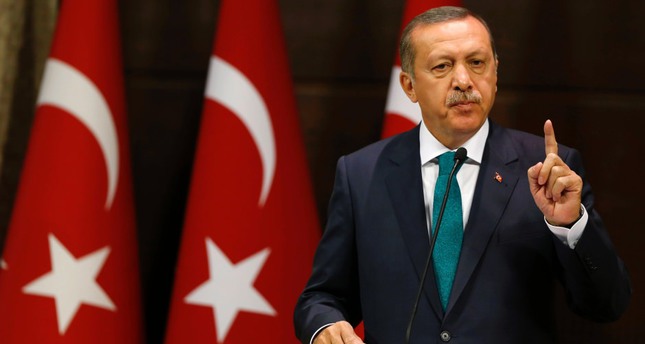 The Russian airstrikes in Syria are unacceptable, said President Erdoğan, adding that countries supporting the Syrian regime would eventually be held to account for their actions

President Recep Tayyip Erdoğan, speaking on Sunday before flying to Strasbourg to attend an anti-terrorism meeting organized by the Union of European Turkish Democrats (UETD), said Russia's policy in Syria was isolating it in the region, adding that the Russian administration's decision to launch airstrikes against the moderate Syrian opposition in support of the Assad regime was upsetting and disturbing. Russia is a major commercial partner of Turkey, with bilateral trade reaching $11 billion in the first half of the year. The two countries aim to achieve a trade volume of $100 billion by 2020, with officials currently working out various means to further ease business ties. Turkey is also a major recipient of Russian natural gas, with discussions underway to build the Turkish Stream pipeline to add to the already existing gas pipelines.

The president, who is also scheduled to visit Brussels today to discuss the refugee problem and other issues with top EU officials, described Russia's moves in Syria as a grave mistake, accusing Moscow, Tehran and Baghdad of defending Syrian leader Bashar Assad, who is terrorizing his people.

"We are also assessing the current state of affairs and will be formulating our discussions in a very different way in the future," he said.

"Russia has no border with Syria. What is Russia trying to do here? It is doing so since the regime in Syria demanded [to intervene in the country], but there is no obligation to conduct such an operation with each regime's demand," he added. Russia's Syria operation is not acceptable in any way for Turkey, Erdoğan said.

Russia began air strikes on Wednesday to bolster the regime of President Bashar Assad. Moscow initially described the air strikes as solely targeting ISIS targets, but later expanded its mandate to include "other terrorist groups" before largely hitting moderate groups opposed to Assad. Civilians have been the main victims of Russian strikes, according to reports. He said: "There are people who are uncomfortable with our policies. The countries that cooperate with the regime [in Syria] will be accountable for their actions" and added that those who cooperate with "state terror" will pay a steep price before history.

Erdoğan criticized EU countries for what he said was their hesitant attitudes in accepting refugees, saying that they had only taken in around 200,000. "Turkey is hosting 1.7 million Syrians and 300,000 Iraqis. How many refugees are Russia and Iran sheltering?" he asked.

Remarking on the European attitude on refugees, he said: "They deem it appropriate to advise us. They are asking us to shut our doors on refugees so that none reach Europe. They are telling us to keep all the refugees within our borders. Our patience has limits. After a while, we will do what is necessary. If they don't cooperate with us to address this problem, we will decide what to do accordingly. We need to take everything into account before reaching a decision."

When asked about U.S. President Barack Obama's remarks on the lack of accomplishments from the train-and-equip program for moderate Syrian opposition, Erdoğan said Turkey is successful since it has done its best in this issue and called U.S. officials to have much closer contact with Turkish officials. "In the following process, again, we will show the same effort in the train-and-equip [program]," he said.

About the Supreme Board of Elections' (YSK) decision on demands to relocate ballot boxes, Erdoğan said the YSK disregarded the decisions made by provincial and district electoral boards with the ruling. "In this regard, hopefully we do not have the same problems this election like the ones in the June 7 elections. If so, the YSK is responsible because the conditions are obvious." The YSK on Saturday overruled by a majority of votes the demands by local election boards to relocate ballot boxes due to security concerns in the country's eastern and southeastern provinces ahead of the Nov. 1 snap elections.

Addressing a large crowd in the "One Voice against Terror" meeting in Strasbourg, France on Sunday, President Recep Tayyip Erdoğan said those who eat and drink from Turkey and then attack the unity of the country will never be forgiven, referring to members of the PKK terrorist group, which recently restarted it attacks in Turkey, particularly in the eastern region of the country.
"We are fighting terrorism, not our brothers living in the region, we are united as one," he said, adding that terror will be finished by those who will go the polls to cast their votes in the upcoming elections, and Turkey has the determinacy to speak the language that terrorists understand.

Erdoğan also spoke of Gülen Movement-affiliated infiltration of state institutions in his speech and claimed they cooperate with PKK. He said: "This Gülenist infiltration works together with PKK. They escape from the country one by one. Why do you escape?"
Last Update: Oct 04, 2015 10:35 pm
RELATED TOPICS