President Erdoğan: EU remembers value of Turkey as a result of the refugee crisis 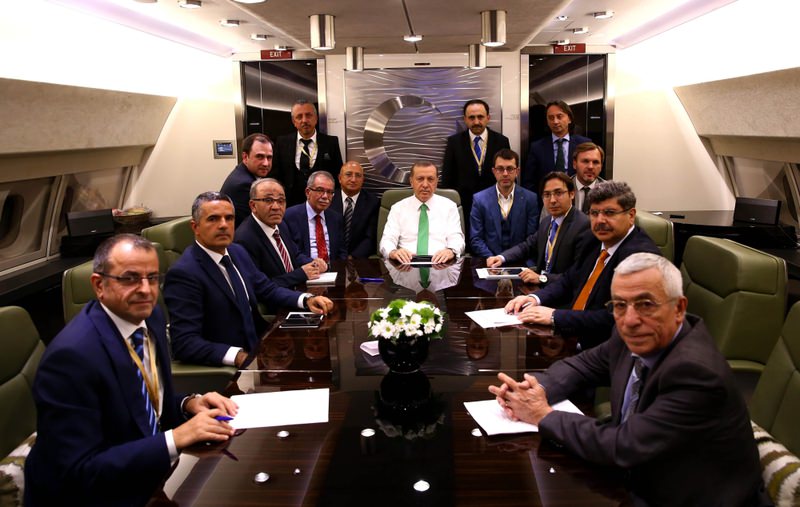 President Recep Tayyip Erdoğan, speaking to journalists accompanying him during his trip to Japan on Wednesday, said the refugee influx caused by the continuing Syrian crisis had once again highlighted Turkey's crucial importance to Europe and that EU leaders had been reminded of this fact. Erdoğan, who visited Strasbourg and Brussels and met with top EU leaders and Belgian officials during the first half of the tour, said he was very pleased with the visits. "We met with our compatriots in Strasbourg and were very glad to attend the anti-terrorism meeting."

He expressed his satisfaction with the success of the visit to Belgium, where he met with King Philippe, which he noted was the first state visit to the country since 1838 during the Ottoman era. Erdoğan received the highest state medal from the Belgian king, who also was presented with a Turkish state medal. The refugee crisis topped the agenda during meetings with European Parliament President Martin Schultz, European Council President Donald Tusk and European Commission President Jean-Claude Juncker. Erdoğan said, "We also discussed Turkey's membership negotiations and talked about the delays in the opening of chapters, especially chapters 15, 17, 23, 24 and 30."

Juncker agreed with the need to accelerate the pace of the talks, with special emphasis on the visa liberalization process. Erdoğan said, "I saw that they intend to complete it before 2017."

Schultz, Tusk and Juncker seemed more eager to cooperate than before, said the president, adding: "They all admit the burden Turkey is shouldering, especially concerning the refugees. They agree that the EU needs to share the weight, which they will resolve after deliberations among themselves."

With Turkey sheltering 2 million Syrians and Iraqis, 400,000 of whom are in Istanbul alone, it would be encouraging if Europe continued to remain as sensitive to their plight as now, he said.

Erdoğan expressed his optimism over the improvement in Turkey's relations with the EU. "My meetings with Schultz, Tusk and Juncker, who are the most senior EU officials, were very positive. They agree Turkey's importance is constantly rising. They are also very sensitive on the threat of terrorism," said Erdoğan, who noted that their stance toward the PKK terrorist organization was clear. "They are aware Turkey's stability is very important for the EU. They know that a stable Turkey will be more effective on every issue, including the refugee crisis."

When asked whether his visit to Brussels could be seen as historic, Erdoğan said: "We can't know how sincere they are. It could also be tied to the fact that they need Turkey. EU member countries are now involved in calculating how few refugees they are forced to admit. Our aim was never to admit the refugees so that they could travel onto Europe. Our efforts are a good indication for the EU."

On the matter of serious criticism voiced in European media organs about freedom of speech in Europe, Erdoğan said the matter had come up during the meetings: "I openly told them no other leader anywhere else in the world faced the degree of insults as my family and I face in Turkey. Anti-Erdoğan media is full of such insults. We patiently opposed them. Just look at what they wrote about my son Bilal. He is in Italy to complete his Ph.D., and they claim that he secretly took $1 billion with him. Can there be such a lie? They also use the social media for falsehoods. Such attacks would be tolerated nowhere in the world. But in Turkey, some media organs spread such lies and political parties try to exploit them. Our lawyers respond to such attacks appropriately."

On the Turkish proposal for a safe zone in Syria's north, he pointed to the recent joint communique by the U.S., France, Turkey, the U.K., Germany, Qatar and Saudi Arabia and added that these seven countries were working on the matter. "However, we need to make one thing clear. This will be no buffer zone. What is being worked on is a safe zone cleared of all terrorists and a no-fly zone. The aim is to secure a zone of safety for Syrians. This will be important for our Syrian guests who want to return to their country and also those internally displaced. I don't approve of tent or container cities. In our meetings, I told my counterparts that we would be able to build authentic building projects. They wanted to study our proposals. If realized, this will be the most important development since the initiation of the train-and-equip program."

On the issue of the Gülen Movement led by fugitive imam Fethullah Gülen and the threat it poses to Turkey through its operatives who have infiltrated key state institutions, Erdoğan said everything possible was being done, arguing that the reason why some had fled abroad was due to the effective combating of the group. "Our fight will continue after the elections on Nov. 1. Everyone who loves this country needs to help. They have newspapers and televisions. Where do they find all this money? Did their leader in Pennsylvania earn it all? Our citizens need to reflect on these matters."

Erdoğan said he had also talked about the Gülenist threat with Belgian Prime Minister Charles Michel. "I gave him documents and information. He thanked me for informing him about the matter and promised to follow it up. We will also do so." When asked how the judiciary allowed media organs tied to a group defined as a terrorist organization to continue to operate, Erdoğan said: "That's a good question. Everything possible within the bounds of the law needs to be done."

Reconciliation process has not ended

The escalation of PKK terrorism had forced the government to put the reconciliation process in the freezer, said Erdoğan, adding: "I did not say the reconciliation process had ended. I said at the current juncture, it was put in a freezer." He said the Peoples' Democratic Party (HDP) hid behind the terrorist PKK and violated the reconciliation process. He said: "They said the PKK and YPG [People's Protection Units] were behind them. They called for violent street demonstrations. Fifty Kurdish brothers died during the Oct. 6-8 demonstrations. Who killed and who died? Both were Kurds. Our governors and local administrators need to utilize their power to protect the citizens. The Domestic Security Law passed by the government needs to be implemented. Citizens need to know that the state is behind them. Recent operations significantly hurt the terrorist group, as 2,000 terrorists were killed. We lost members of security forces. I would like to once again extend my condolences to their families and loved ones."

On the video featuring a terrorist militant's body being dragged by a police vehicle, Erdoğan said: "I don't know the details. Who dragged the body, whose body was it, and who recorded the video? If the police were responsible, it's obviously wrong. Such conduct is not acceptable."

President Erdoğan said repeated Russian infringements of Turkey's airspace in the past few days were incompatible with the close links the two countries have and added that the Russian administration was close to losing Turkey as a friend.

He noted that the NATO Council had held an emergency session and released a tough statement condemning Russian actions. "It said violating Turkish airspace meant violating NATO airspace. I must admit that Russian statements about these violations cannot be deemed as serious. Russia perpetrating such acts with a neighboring country with which it has a high-level cooperation council is unbecoming."

He said he had met with Russian President Vladimir Putin late last month and also spoke to him after Russia began its air strikes in Syria. "Violations of our airspace after all that do not correspond to serious statesmanship. We are definitely upset. It should not have happened."

When asked if he would be talking to Putin to prevent the violations from deteriorating into clashes, Erdoğan said: "I don't believe Russia would do such a thing. NATO's emergency meeting showed how seriously they took the matter." He said the violations occurred after he talked with Putin, and he did not believe it meaningful to call Putin again under such circumstances.

When asked about the close commercial ties between the two countries, Erdoğan argued that trade ties were a matter that both sides needed to be sensitive about. "If Russia doesn't build the Mersin Akkuyu Nuclear Plant, someone else will. They have already invested $3 billion there. So, it is Russia that needs to be careful there. On the issue of our natural gas imports, we are their top natural gas customer. Losing Turkey will be a major loss for Russia. If necessary, Turkey can get the gas from elsewhere. So, Russia needs to assess these issues carefully. There is a high-level cooperation council mechanism between the two countries. The council's end would be wrong for Russia too."

He said Turkey had no desire to lose what it had built with Russia over the years, said Erdoğan, adding: "That is why we are upset about Russia taking steps to jeopardize them. We cannot act emotionally."

He said the Turkey-U.S. dialogue on the Syrian crisis had begun long ago, with foreign ministers and military officials involved in close contact. "I will probably talk to President Barack Obama next week to discuss the latest developments in detail."
When asked how he viewed both the U.S. and Russia voicing their intention to help the PKK-affiliated Democratic Union Party (PYD) in northern Syria against the Islamic State of Iraq and al-Sham (ISIS), Erdoğan said he did not believe the U.S. and Russia would be on the same page on a matter that was of such critical importance for Turkey. "First of all, Turkey and the U.S. are strategic allies. We are a member of NATO. Can you imagine these two countries being on the same page when Turkey is wronged? That's impossible. Everyone needs to know that the PYD and PKK are one and the same. Russia is not in Syria against ISIS. They once inadvertently let it slip that in their opinion every group against the regime is a terrorist group. It appears their real intention is to build a base in Latakia and strengthen their military presence in Syria. All countries, including the U.S., need to take a stand after the NATO council meeting. We cannot tolerate the current state of affairs."

About the withdrawal of allied Patriot batteries from Turkey, Erdoğan underlined the continuing deliberations among diplomatic and military staff among allies and assured that what needed to be done would be done.
Last Update: Oct 08, 2015 1:06 am
RELATED TOPICS