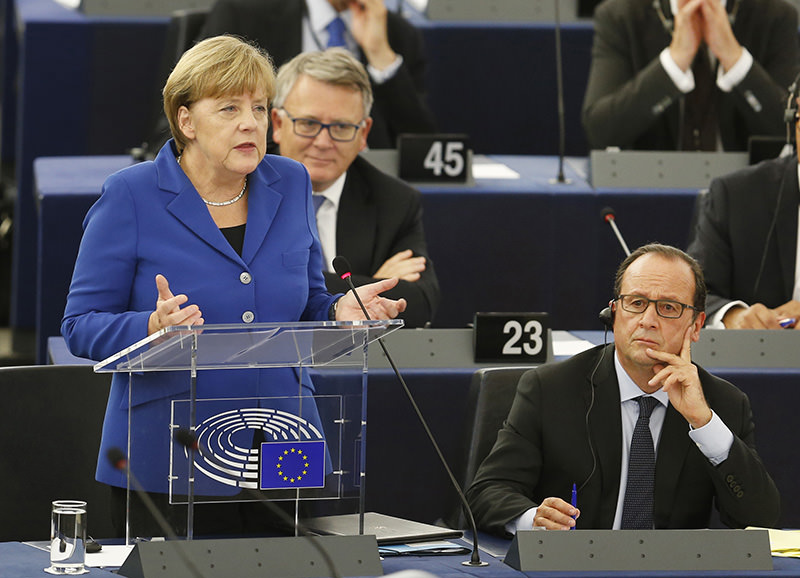 Angela Merkel gestures as she delivers her speech as part of a joint appearance with French President Francois Hollande at the European Parliament in Strasbourg, eastern France, Oct. 7, 2015 (AP photo)
by daily sabah
Oct 12, 2015 12:00 am
German government spokesman Steffan Seibert said on Monday that Chancellor Angela Merkel will pay on official visit to Turkey on Saturday, Oct. 18 to discuss several issues including the Syrian war, the refugee crisis and cooperation in the fight against terror. Merkel will meet President Recep Tayyip Erdoğan and Prime Minister Ahmet Davutoğlu.

European Commission President Jean-Claude Juncker presented a two-part draft action plan for the refugee crisis during Erdoğan's visit to Brussels on Monday, Oct. 5 in which Turkey would be provided with up to 1 billion euros for 2015-16. According to the plan, Turkey will also cooperate with Bulgarian and Greek authorities, including opening six refugee reception centers.

In a written statement released on Tuesday, the Foreign Ministry said the draft action plan that aims to enhance collaboration between Ankara and the EU on the refugee crisis will be analyzed by a joint working group, yet no final agreement has been signed.

Germany and Turkey are working to find a comprehensive solution to the crisis as a result of Syria being torn apart by war for more than four-and-half years.

Davutoğlu previously met with Merkel in New York during the U.N. General Assembly meeting where the two leaders reportedly agreed on forming a commission at the ministerial level to adopt a common strategy to deal with the refugee crisis.

Additionally, it is a matter of debate whether Turkey's negotiations with the EU for full membership will be discussed during Merkel's meetings with Turkish authorities.

In recent statements on a talk show on Wednesday last week, Merkel indicated her staunch opposition to Turkey's EU membership, and said: "I have always been against EU membership, President Erdoğan knows this, and I still am," adding that her view did not change just because Ankara's help was needed to stem the flow of refugees to Europe.

It is expected that the implementation of the draft action plan could possibly accelerate the visa liberalization process. The plan is also expected to boost relations between Turkey and the EU should both parties fulfill what is required of them.