Turkey is one of Russia's most important partners, says Russia's President Putin 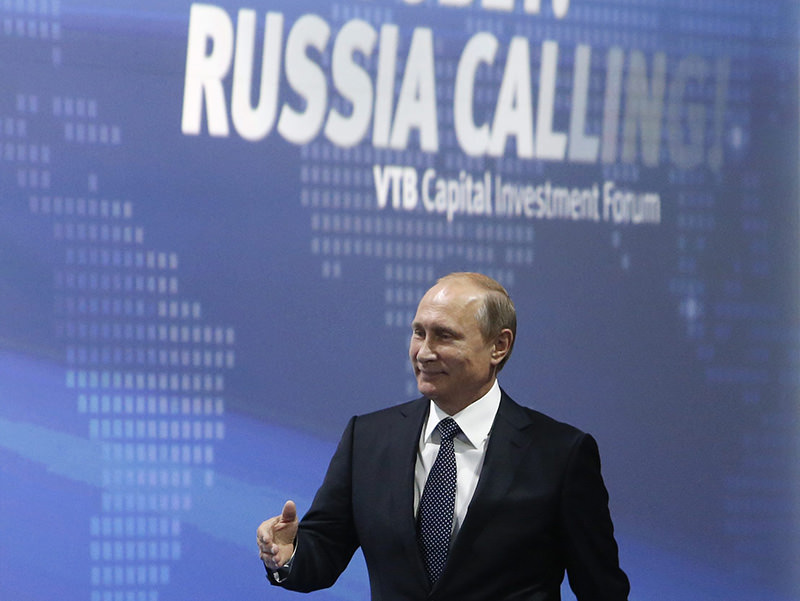 Putin attends the 7th annual VTB Capital 'Russia Calling!' Investment Forum in Moscow, Russia, 13 October 2015 (EPA photo)
by Daily Sabah with Agencies
Oct 13, 2015 12:00 am
Russian President Vladimir Putin said at an investment forum on Tuesday that Turkey is among Russia's most important partners and the country needed to understand how to build relations with Turkey to fight terrorism in Moscow.

He added that Russia is not striving for leadership over Syria, adding that existing cooperation with Western countries over the Syrian conflict was not enough.

Following Russian jets consecutively violating Turkish airspace last week, President Recep Tayyip Erdoğan said the incidents were incompatible with the close links the two countries have and added that the Russian administration was close to losing Turkey as a friend.

"Violations of our airspace do not correspond to serious statesmanship. We are definitely upset. It should not have happened," he said while speaking to journalists accompanying him during his trip to Japan last week.

Previously on Sunday, Putin indicated the country is not going to conduct ground operations in Syria, saying "Our goal was to stabilize the legitimate authorities and create conditions for finding a political compromise," referring to Syrian leader Bashar Assad, who had been a staunch ally of the country since the beginning of the civil war in 2011.

Russian airstrikes started on Sept. 30 with the pretext of fighting against the Islamic State of Iraq and al-Sham (ISIS); however, this pretext later expanded its mandate to include "other terrorist groups" before largely hitting moderate groups opposed to Assad.

Russian fighter jets violated Turkish airspace on Oct. 3 and Oct. 4 and Turkey's Ministry of Foreign Affairs summoned the Russian ambassador to the ministry twice in the last week after the incidents.