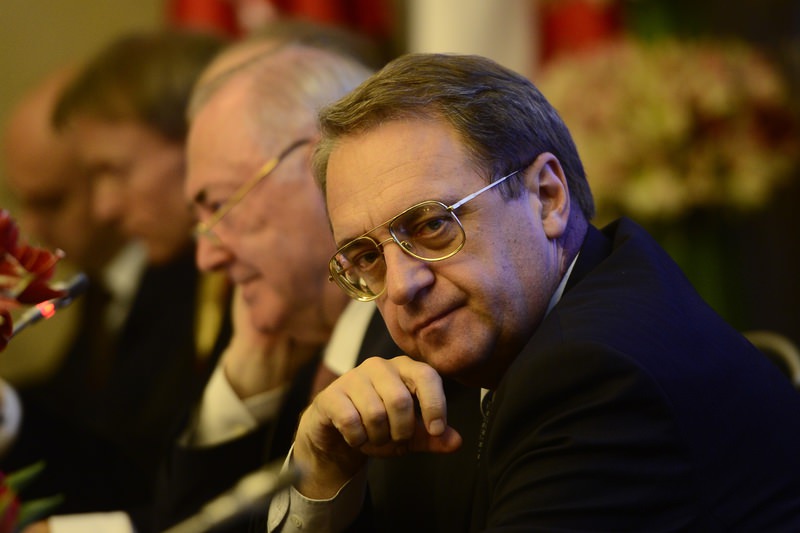 Bogdanov's statements, which refuted claims accusing Russia of providing arms to the People's Protection Units (YPG), came after Prime Minister Ahmet Davutoğlu warned Washington as well as the Kremlin that arms delivered to the YPG may fall into the hands of terrorists like the PKK.

While Ankara summoned the U.S. and Russian ambassadors about the issue, Russian Foreign Minister Sergey Lavrov said in an interview with NTV, "I want to be honest, we barely have any doubt that at least a considerable part of these weapons will fall into terrorists' hands."

In a message sent to a joint international conference organized in Moscow by two Turkish and Russian think tanks on Thursday, Russian Foreign Minister Lavrov said, "Terrorism is a global threat, and we should join forces against it."

"We are in Syria in accordance with the request of the Damascus administration," Meshkov said.

The YPG is the armed wing of the PKK-affiliated Democratic Union Party (PYD).

Russia began flying combat missions over Syria on Sept. 30 following an escalation of its military support for President Bashar al-Assad's regime. Despite Russia claiming to be targeting ISIS, Turkey and its allies in the U.S.-led anti-terror coalition have complained of Russian air strikes on "moderate" forces fighting Assad.

There have been two incursions by Russian aircraft into Turkish airspace, one taking place on Oct. 3 and the other on the following day. Each time Turkish F-16 jets intercepted the Russian fighters forcing them to turn back.   Turkey has formally protested the incursions, which Moscow said were due to "bad weather conditions."

Turkish and Russian diplomats, academics and businessmen attended the Thursday conference co-organized by the Center for Strategic Research of the Turkish Ministry of Foreign Affairs (SAM) and the Russian International Affairs Council.   Held under the theme "Russia and Turkey: Forging Multidimensional Partnership," the conference was held on the 95th anniversary of the establishment of diplomatic relations between the two countries.