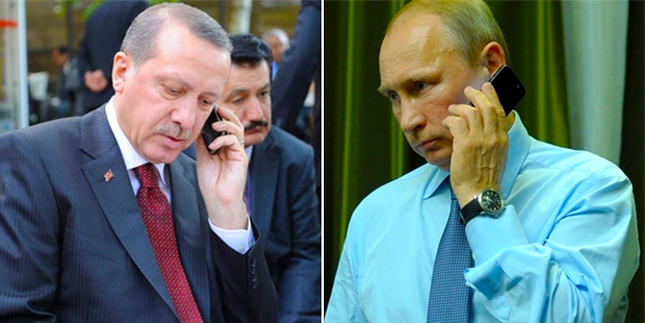 by Daily Sabah Oct 21, 2015 12:00 am
President Erdoğan has spoken with Putin on Wednesday in a phone call and was informed over Assad's visit to Moscow. Erdoğan has expressed his concern over an expected refugee wave following Russia's air strikes in Syria during his call with Putin, presidential sources said.

According to reports Erdoğan underlined the importance Turkey attaches to fighting all terrorist groups including ISIS pointing to links between the Syrian Kurdish YPG militia and PKK, who have fought a decades-old insurgency against Turkey.

Syria's President Bashar al-Assad met with Vladimir Putin on Tuesday in an unannounced visit to Moscow, the Kremlin announced on Wednesday.

"Yesterday evening, the president of the Syrian Arab Republic, Bashar al-Assad, made a working visit to Moscow," Peskov said, adding that he met with Putin though he did not specify whether he was still in Moscow Wednesday.

The two leaders agreed to discuss all these issues in a detailed manner when they meet at the G20 Leaders Summit, which will be held on Nov. 15-16 in Turkey's southern province of Antalya.

According to the Kremlin website, the Russian president said terrorism in the Middle East and the destabilization of the region represented a concern for many countries.

The meeting came after the U.S. and Russia signed an agreement Tuesday to "de-conflict" air operations above Syrian airspace.

Russia began carrying out airstrikes in Syria late last month. The strikes are aimed at supporting the Assad regime, a Russian ally.

But Turkey and the West accuse Russia of targeting moderate Syrian groups opposed to Assad, many of which are supported by Saudi Arabia, Turkey, the U.S. and Europe.

Russian, US, Turkish, Saudi FM's are expected to meet on Friday about Syria, according to Moscow.

To avoid military conflicts in the region, the U.S. and Russian military officials on Oct. 1 began talks about air safety above Syria.

At least 250,000 people have been killed since the beginning of the Syrian conflict in 2011, with 7.6 million internally displaced and more than 4 million having fled to nearby countries.