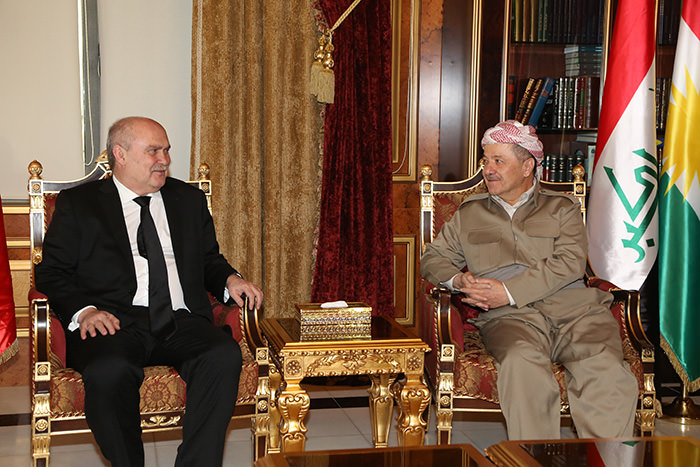 During the closed-door meeting, it has been reported that Prime Minister Barzani congratulated Sinirlioğlu on the results of the Nov. 1 election and said he hoped that good relations between Turkey and the KRG will continue. While Sinirlioğlu urged to further extend cooperation between Turkey and Iraqi Kurdistan, he also underlined the significance of cooperation in efforts to completely eliminate terror and establish stability in the region. They both agreed on the significance of Turkish and Iraqi Kurdish coordination and cooperation for the region.

KRG sources have further said Sinirlioğlu held bilateral talks with President Barzani as well other as other officials in the region. It has been reported that they discussed adding a pipeline to the Irbil-Ceyhan oil pipeline, as the KRG has an active role in northern Syria. Following the previous conflict between Baghdad and Irbil due to oil exportation to Turkey, it was reported that the Turkish government is holding talks to establish an additional pipeline along with aiming to gain the upper hand in international arbitration.

Additionally to pipeline talks, Sinirlioğlu reportedly conveyed Ankara's support to Irbil in its combat against the Islamic State of Iraq and al-Sham (ISIS). While the Turkish government is against the PKK-affiliated Democratic Union Party (PYD) controlling northern Syria, it has also been indicated that Ankara may have asked the KRG to urge its peshmerga forces for active engagement in the region. With the PKK increasing its terror activities throughout eastern and southeastern Turkey, stalling the reconciliation process, Sinirlioğlu and President Barzani discussed the Kurdish issue in Turkey as well as the future of the process.