Germany ready to cooperate with Ankara after election victory 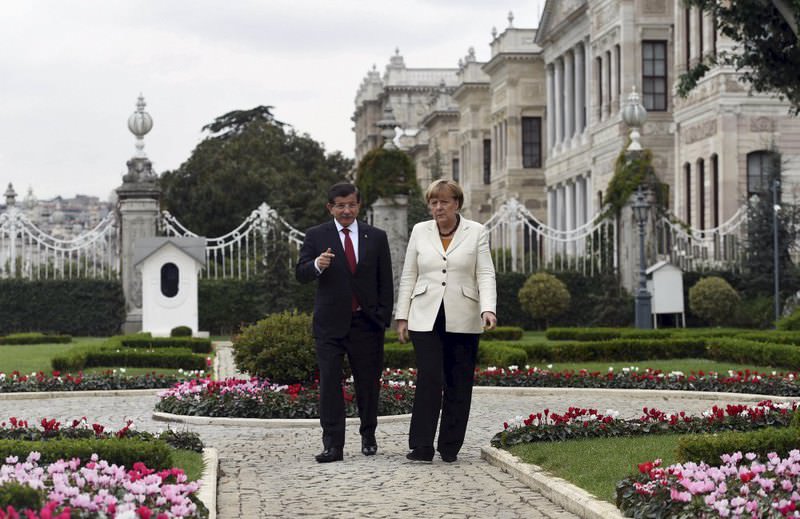 by Daily Sabah with AA
Nov 04, 2015 12:00 am
Berlin welcomed the outcome of the Nov. 1 elections held on Sunday and expressed its readiness to enhance cooperation with Ankara in tackling the refugee crisis and regional security challenges.

According to a written statement released by the Turkish Prime Ministry Press Office, German Chancellor Angela Merkel phoned Davutoğlu late on Monday to congratulate him on his success.

"Our prime minister stressed that the elections were held in a peaceful environment with a voter turnout of over 85 percent, which shows the maturity of Turkish democracy. Turkish people chose political, democratic and economic stability," said the statement.

During the phone conversation, both leaders also exchanged views on the recent developments in Syria, the fight against the Islamic State of the Iraq and al-Sham (ISIS) and the refugee crisis.

Speaking on Monday, Chancellor Angela Merkel's spokesman, Steffen Seibert, hailed the high voter turnout as an expression of commitment to democracy. "We welcome that yesterday's parliamentary elections in Turkey [were] carried out in a peaceful way. There has been a very high voter turnout. That underlines the strong commitment of Turkish people to democracy," Seibert said.

He said the German government was ready to assist Turkey in addressing the challenges ahead, which he listed as the effects of the Syrian crisis; the fight against ISIL; the political solution process with the Kurds; and domestic polarization in the country.

"Addressing these challenges with the spirit of national unity and readiness for compromise is important, as Prime Minister [Ahmet] Davutoğlu said during his address on election night," Seibert stressed. He said Germany and Turkey will intensify cooperation in addressing the refugee crisis after the elections.

"We note the election results with respect," German Foreign Ministry deputy spokeswoman Sawsan Chebli said Monday. "This respect also includes acknowledging the will of the democratic electorate and not commenting on that," she added.

When asked about the concerns of some observers about a possible "concentration of power" in Turkey after Sunday's election, Chebli said: "I cannot understand what you mean by concentration of power. The electorate has decided, they have decided to give AKP an absolute majority to form a single-party government and we will respect this election result."

Before the Nov. 1 elections, Merkel and the EU were ready and waiting for the election results to start negotiating with Ankara with regards to the refugee crisis. Having agreed on a draft action plan with Ankara, Brussels was in favor of a strong single-party government in Turkey to carry out the process of finding a solution to the refugee crisis.

Greek Prime Minister Alexis Tsipras called Prime Minister Ahmet Davutoğlu on Monday to congratulate him on the AK Party's election victory. Tsipras asked for a meeting from Davutoğlu in the upcoming days to discuss the growing refugee crisis that affects both Athens and Ankara negatively. Tsipras is expected to call on his counterpart Davutoğlu to step up cooperation between the two countries as refugees trying to reach the Greek islands by boats pose a significant threat.