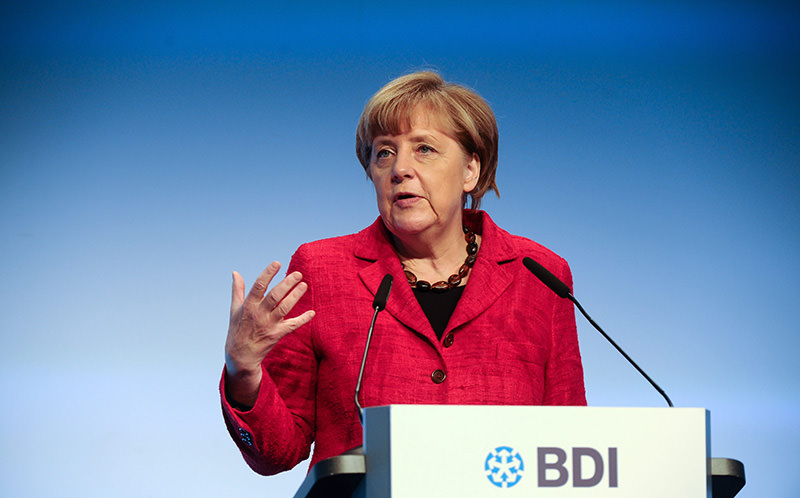 German Chancellor Angela Merkel speaks during the 'Tag der Deutschen Industrie' event (German Industry Day 2015) (EPA Photo)
by Daily Sabah with AA
Nov 04, 2015 12:00 am
German Chancellor Angela Merkel has called on EU member states to "divide the burden" of the refugee crisis with Turkey. "We must divide the burden on Turkey, caused by harboring more than 2 million refugees, between Turkey and Europe," Merkel told reporters on Tuesday before a parliamentary group meeting with Horst Seehofer, Christian Social Union in Bavaria (CSU) chairman and coalition government partner.

Merkel also said that close partnerships, especially with countries like Turkey, were needed to legalize the status of asylum seekers.
Before the Nov. 1 elections, Merkel and the EU were ready and waiting for the election results to start negotiating the refugee crisis with Ankara. Having agreed on a draft action plan together, Brussels desired a strong government in Turkey to carry out the process of finding a solution to the refugee crisis.

Last week, the German chancellor described cooperation with Turkey as vital to tackling the issue and said she hoped for intensified talks after Turkey's general elections.

"After these elections, we can also increase our bilateral visits," she said. "I firmly believe that the refugee influx can only be diminished by the collective action of the EU, Greece and Turkey."

Turkey has been home to around 2.5 million refugees, and the country has so far spent $8 billion on dealing with the crisis, while support from other countries has amounted to only $417 million.

Also on Tuesday, Merkel said she did not want renewed military tensions in the Balkans following the recent refugee influx into Europe.

"I don't want any more military tensions there," she said during a CDU event in the southern city of Darmstadt.

Merkel criticized the closing of borders to refugees by some EU states, saying such actions would not solve the refugee crisis.

"I do not want to be pessimistic, but disputes could turn more quickly than we think into fights, then fights into other actions that none of us ever want," she warned.

She further said that the closure of the Austrian border would lead refugees to attempt crossing into Germany from other neighboring countries.

Merkel faces growing criticism at home over her government's policy for asylum seekers as a record 577,000 refugees arrived in Germany between January and September. Around 1 million are expected by the end of the year.

Germany has taken in the largest number of refugees in Europe as the continent experiences the greatest movement of people since World War II, a development that has been exploited by right-wing groups.

According to a written statement released by the Turkish Prime Ministry Press Office, Merkel called Prime Minister Ahmet Davutoğlu late on Monday to congratulate him on the Justice and Development Party's (AK Party) success in Sunday's elections.

"Our prime minister stressed that the elections were held in a peaceful environment with a voter turnout of over 85 percent, which shows the maturity of Turkish democracy. Turkish people chose political, democratic and economic stability," said the statement.

During the phone conversation, both leaders exchanged views on the recent developments in Syria, the fight against the Islamic State of the Iraq and al-Sham (ISIS) and the refugee crisis.

Speaking on Monday, Merkel's spokesman Steffen Seibert hailed the high voter turnout as an expression of commitment to democracy. "We welcome that yesterday's parliamentary elections in Turkey [were] carried out in a peaceful way. There was very high voter turnout. That underlines the strong commitment of Turkish people to democracy," Seibert said.

He said the German government was ready to assist Turkey address the challenges ahead, listing the effects of the Syrian crisis, the fight against ISIS, the political reconciliation process with Kurds and domestic polarization in the country.

"Addressing these challenges with the spirit of national unity and readiness for compromise is important, as Prime Minister Davutoğlu said during his address on election night," Seibert said. He said Germany and Turkey will increase cooperation in addressing the refugee crisis after the elections.

"We note the election results with respect," German Foreign Ministry deputy spokeswoman Sawsan Chebli said on Monday.
"This respect also includes acknowledging the will of the democratic electorate and not commenting on that," she added.
Last Update: Nov 04, 2015 3:32 pm