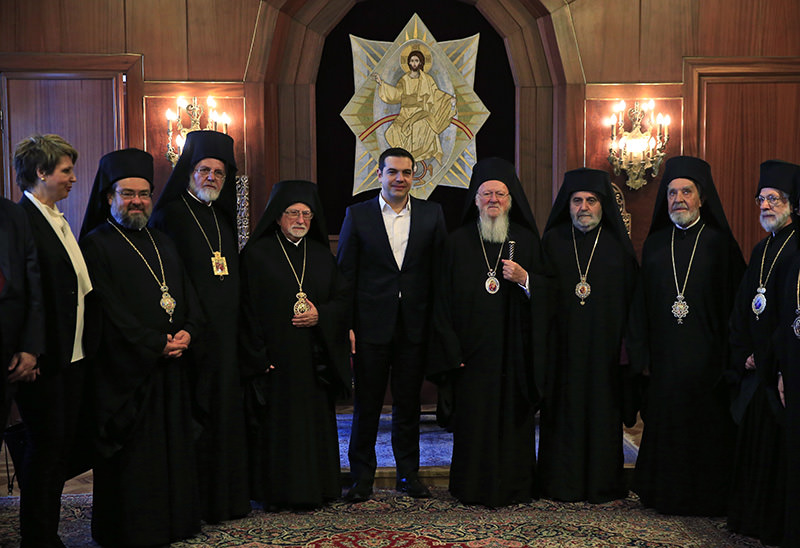 by Anadolu Agency
Nov 18, 2015 12:00 am
Greece's Alexis Tsipras paid a visit to Istanbul's Fener Greek Orthodox Patriarchate for the first time as prime minister on Wednesday.

The 41-year-old leader met with Patriarch Bartholomew I, the Istanbul-based leader of many of the world's Orthodox Christians at the administration building of the Patriarchate in Istanbul's historic Fener district.

Speaking to the press after the hour-long meeting Bartholomew I said that the two discussed refugee crisis as well as relations with Greece and interreligious dialogue.

"[Tsipras] had visited us three times. We met also in Athens. We know each other very well. I wish him success on his difficult task," he said.

Tsipras is in Turkey for a two-day visit to discuss, among other issues, the ongoing refugee crisis.

More than 150,000 people crossed from Turkey to Greece last month, compared with more than 8,500 in October 2014, according to EU's border agency, Frontex.

The EU leaders have agreed to discuss a 3-billion-euro ($3.23 billion) deal with Turkey for refugee support and to help stem the tide of people fleeing the Syrian conflict.

The Turkish government, according to official figures, has so far spent $8 billion to accommodate around 2.5 million refugees it hosts inside the country.

Tsipras arrived in Istanbul on Tuesday evening and watched a friendly match between Turkey and Greece in Istanbul alongside Turkey's Prime Minister Ahmet Davutoğlu, which resulted in a scoreless draw.

Tsipras is expected to meet with Turkey's president, Recep Tayyip Erdoğan, as well as other political party leaders in Turkey.
Last Update: Nov 18, 2015 11:55 am