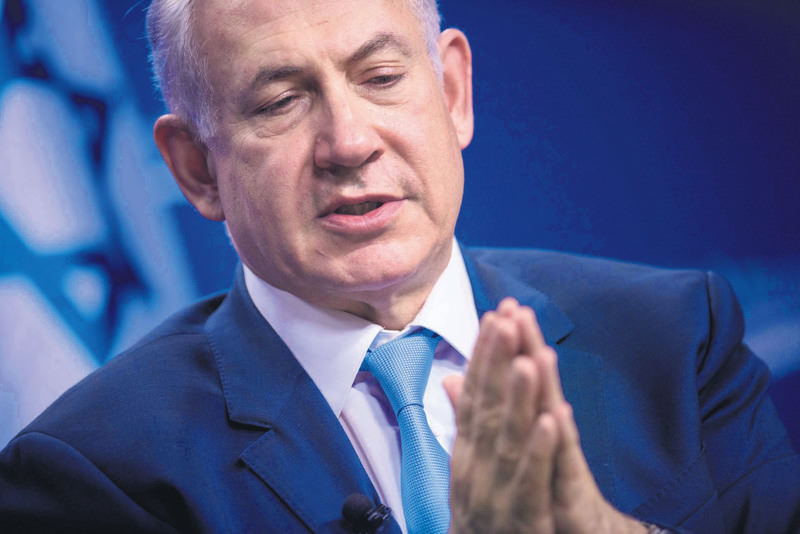 by Ali Ünal Nov 21, 2015 12:00 am
Israeli Prime Minister Benjamin Netanyahu has signaled that the restoration of Turkish-Israeli diplomatic relations is likely to take place soon. Speaking at the Jerusalem Post Diplomatic Conference in Jerusalem on Wednesday, Netanyahu said that they are looking into restoring relations. Responding to the question, "Considering that President Recep Tayyip Erdoğan won the elections in Turkey, do you think it is possible to normalize relations with Turkey?" Netanyahu said: "We are looking into it." He continued: "Despite the difficult situation in diplomatic relations, the trade volume between Turkey and Israel is at its highest level in history, and there is a possible opportunity for cooperation with Turkey on the natural gas reserves found in the Mediterranean." Over the last few years, economic cooperation between Turkey and Israel has improved significantly despite diplomatic tensions between the two governments. According to the Turkish Statistics Institute, (TurkStat) trade between Israel and Turkey has more than doubled in the past five years to $5.6 billion. In addition, Israel is considering transporting gas from its Leviathan field to international markets via Turkey after the normalization of relations. It is believed that economic realities are pushing Netanyahu to seal the agreement to restore relations.

Government officials have demanded an official apology for the Mavi Marmara incident and compensation for the victims' families as well as an easing of Israel's blockade of the Gaza Strip in order to restore diplomatic relations. Netanyahu's long-awaited apology came during U.S. President Barack Obama's visit to Israel in March 2013. In 2014, both Israeli and Turkish delegations, after months of intensive talks, reached an agreement that includes significant compensation for the victims' families and ending the blockade of Gaza for humanitarian aid, but the Israel did not take any steps to finalize the deal. Israel's attacks on the Gaza Strip in the summer of 2014 complicated the deal. In June, then undersecretary of Foreign Ministry and current Foreign Minister Feridun Sinirlioğlu held a meeting with Israeli Ministry of Foreign Affairs Director-General Dore Gold and discussed the details of the draft agreement that will lead to a restoration of full diplomatic relations and the mutual appointment of ambassadors.

In her interview with Daily Sabah in August, the most senior Israeli diplomat in Turkey, Israeli Charge D'affaires Amira Oron, hinted that Israel may wait until the government is formed either through a coalition or snap elections for the normalization process to continue. After the Justice and Development Party's (AK Party) landslide victory in the Nov. 1 elections, the new government will be announced by AK Party Chairman Ahmet Davutoğlu on Monday, therefore, continuing the normalization process as expected.
RELATED TOPICS