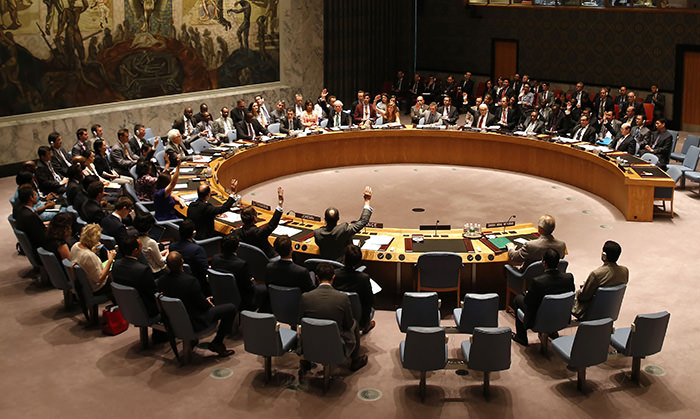 |Reuters Photo
by Uğur Yıldırım Nov 23, 2015 12:00 am
The government has called for a U.N. Security Council meeting to discuss attacks on Turkmens in neighboring Syria days after Ankara summoned the Russian ambassador to protest the heavy airstrikes on Turkmen regions in the war-torn country where DAESH has no presence.

About 1,700 people have fled the mountainous area near the Turkish border as a result of fighting in the last three days. Russian jets hit the area in support of ground operations by Syrian government forces. Sources on the ground report that in addition to some 3,000 regime troops, some 4,000 members of the Shiite Liwaa Zulfiqar militia, around 1,000 militants from the Marxist Alawite group Syrian Resistance, led by Turkish-born Mihraç Ural, are participating in the military operations.

Speaking to Daily Sabah from the Turkmen Mountain area – a strategic location where the regime and its allies have been bombing since last Thursday – 2nd Coastal Division Commander Bashar Molla refuted media reports that the mountain had fallen to the regime. "[Syrian President Bashar] Assad would fall, but the Turkmen Mountain won't," he asserted, adding that 90 percent of the strategic mountain is still under Turkmen control.

Molla accepted that Kızıldağ has fallen but Turkmen fighters, who number around 1,200, will continue to resist the aggression. He stressed that there is no DAESH presence in the region and thanked the Turkish state for lending its support.

Turkey is in discussions with the United States and Russia over the bombing of villages and sent a letter to Britain, the current holder of the U.N. Security Council presidency for November, asking for the subject to be taken up, sources said.

Prime Minister Ahmet Davutoğlu had reportedly consulted the chief of the Armed Forces and the head of the National Intelligence Organization about the intelligence dimension of the issue. Foreign Minister Feridun Sinirlioğlu also discussed the matter by phone with U.S. Secretary of State John Kerry.

Turkey summoned Moscow's ambassador on Friday and called for an immediate end to the Russian military operation near its border in northern Syria, which it said included "heavy bombing" of Turkmen civilian villages.

Russian airstrikes in support of Syrian regime forces have shifted the balance of power in the conflict and dealt a setback to Turkey's aim of seeing Assad removed from power.

The state-run Anadolu Agency reported that the provincial governor of Turkey's Hatay province, which borders the area where the bombing is taking place, said around 1,700 Turkmens had fled toward Turkey over the last three days.

Governor Ercan Topaca said at a news conference that up to 30,000 inhabitants of the mountainous area could potentially be forced from their homes as a result of the fighting. Turkey's Disaster and Emergency Management Authority (AFAD) said Turkmen families fleeing the fighting were being sent to the Yamadi refugee camp across the border from the Turkish town of Yayladağı and that tents, blankets and clothing were delivered to them.
Last Update: Nov 23, 2015 10:17 pm
RELATED TOPICS