Germany calls for easing of tensions between Turkey, Russia 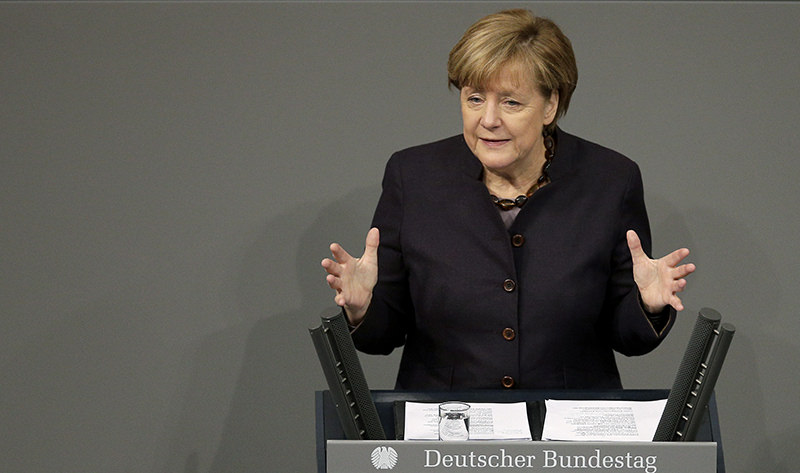 "Of course, every country has a right to protect its territory," Merkel said Wednesday during her speech at the preliminary session of the German parliament in Berlin.

"But, on the other hand, we know what kind of a tense situation we have in Syria and in the surrounding region. I have talked with Turkish prime minister yesterday and urged to do everything to de-escalate the situation," she said.

"We must now do everything to prevent an escalation," she said.

Merkel said that the downing of the Russian aircraft further complicated the situation in Syria, but underlined that only a political solution could end the civil-war in Syria.

"It is important that all the actors which are indispensable for a solution to the Syria conflict sit on the same table, Russia, the U.S., the Europeans, the Arabian states, Iran and Turkey," she said.

Merkel hoped that the Vienna talks, which enabled global and regional actors to sit on the same table for a solution to the Syria conflict, would not be hampered by the downing of the Russian warplane on Tuesday.

Turkish President Recep Tayyip Erdoğan said Wednesday that Ankara did not want to escalate the incident, but could not remain silent in the face of constant violations of its border security and ignorance of its sovereignty on the Turkey-Syria border.

Erdoğan said that Ankara had conveyed its sensitivity regarding the violations before and did its best on its part to avoid such an incident.

On Tuesday, Russian President Vladimir Putin the event will "bear serious consequences" for Turkish-Russian relations. He also alleged that Russian warplanes had been conducting an operation against Daesh north of Latakia in Syria.

However, the Turkish president rejected the Russian claim of Daesh presence in Latakia and its north, saying that Turkmen, not Daesh lived in this region.

Kotzias said that it was crucial to defuse tensions and urged all sides involved to address the situation calmly. He also assured Lavrov of Greece's support for the talks in Vienna to resolve the Syrian issue.

In his phone call to Turkish Foreign Minister Mevlüt Çavuşoğlu, Kotzias congratulated his counterpart for the repositioning of the Ministry of Foreign Affairs of Turkey, and discussed issues related to the recent visit of Prime Minister Alexis Tsipras in Turkey. Both foreign ministers agreed to meet on Dec. 2 at the NATO summit in Brussels.

On Tuesday, two Turkish F-16 fighter jets on an aerial patrol intercepted a Russian warplane within engagement rules when it intruded into Turkish airspace on the Turkey-Syria border.

Russian Defense Ministry confirmed that its Russian SU-24 fighter jet had been shot down, which crashed in the Syrian region of Bayırbucak close to Yayladağı district of southern Hatay province.

NATO confirmed the accuracy of the information that Turkey shared with it about the violation of the Russian warplane.

This was not the first time Russian fighter jets had violated Turkish airspace. In early October, Russian warplanes had breached Turkish airspace for which Russian officials apologized and pledged that no such incident would be repeated; Turkey had also renewed its warning to implement engagement rules, including military response against violations of Turkish airspace.