Erdoğan: Turkey will not apologize to Russia over downing of jet 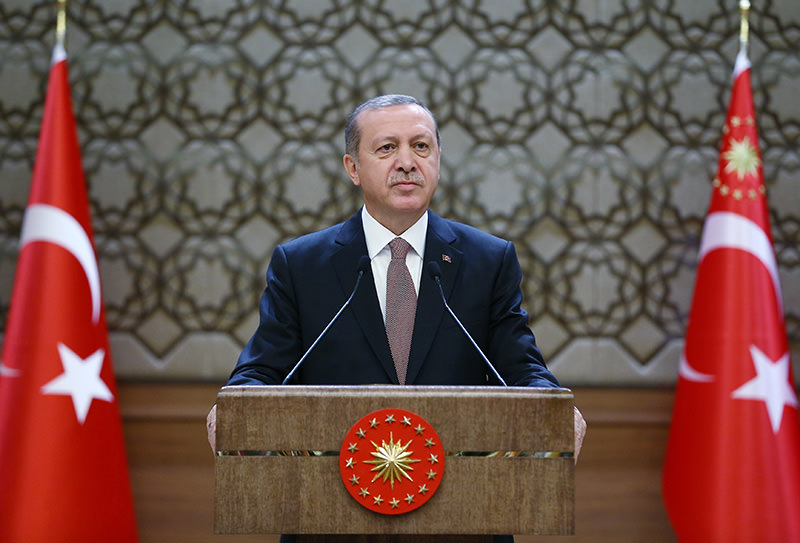 | IHA photo
by Nurbanu Kızıl Nov 26, 2015 12:00 am
President Recep Tayyip Erdoğan and Foreign Minister Mevlüt Çavuşoğlu vowed on Thursday that Ankara would not apologize to Moscow over the downing of a warplane on the Syrian border.

"I think if there is a party that needs to apologize, it is not us," Erdoğan said. "Those who violated our airspace are the ones who need to apologize. Our pilots and our armed forces, they simply fulfilled their duties, which consisted of responding to violations of the rules of engagement. I think this is the essence" he told the CNN.

Russian President Vladimir Putin said earlier his country had not received any apology from Turkish leaders, to which Çavuşoğlu also said, "We don't need to apologize on an occasion that we are right."

Speaking to local headmen at the presidential complex in Ankara during a separate occasion on Thursday, Erdoğan said that the downing of the Russian warplane was not an action against Russia, stating that Turkey is in full alert position to protect its borders amid tensions in the region.

"It is out of question for Turkey to have direct military intervention against Russia or any other country," Erdoğan stated while saying that Turkey expects all countries and world powers to respect its right to sovereignty.

Erdoğan also said that Russia, as the country which violated rules of engagement should question its action and take precautions accordingly, rather than Turkey which has been subjected to airspace violation.

Questioning the essence behind claims that Erdoğan and government officials are trying to 'Islamicize' Turkey, Erdoğan said that 99 percent of the country is Muslim and it does not make sense to make such claim.

"How can one use such an expression?" Erdoğan rhetorically asked, dismissing the claims.

With regards to the attacks on the Turkish embassy in Moscow, Erdoğan said that such a stance is wrong, and added that Turkish security forces would have taken action against such attacks if a similar incident occurred in the country.