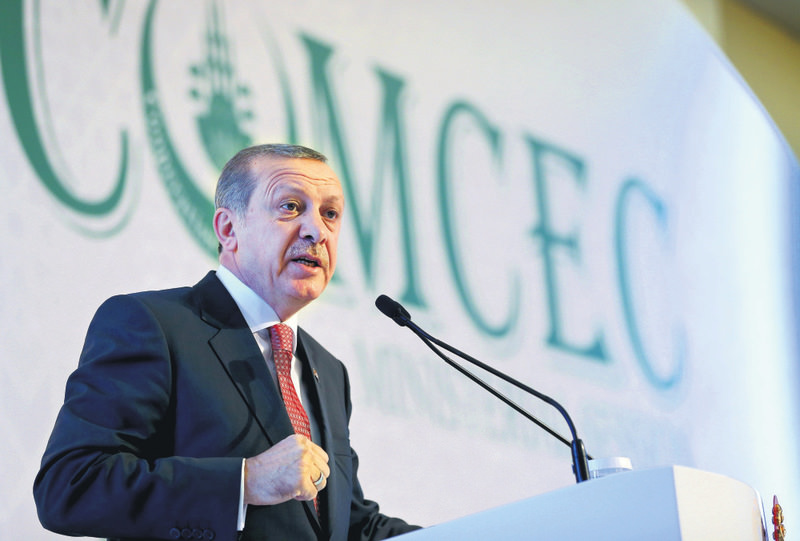 A day after the military downed a Russian jet that violated Turkish airspace, both the president and prime minister said Turkey will not escalate the tension. Officials from Moscow also said they are not going to act hostile toward Turkey but will take certain measures, such as sending anti-missile systems to its bases in Syria

President Recep Tayyip Erdoğan said on Wednesday that Turkey has used its right to defend its airspace and has no intentions to escalate tensions with Moscow. On the same day, Russian officials made similar remarks but also undertook measures such as sending anti-missile systems to its bases in Syria. Erdoğan said that Ankara had previously conveyed its sensitivity regarding the violations and had done its best to avoid such an incident. "The only reason that such an incident has not taken place before is Turkey's good faith and its restraint. Turkey is not in favor of tension, crisis or animosity," he said.

"We have no intention to escalate this incident. We are just defending our security and the rights of our brothers," President Erdoğan said, and added that no one should expect Turkey "to remain silent" when its border security is being violated. He reiterated once again that Turkey is against all types of terrorist organizations and the Assad regime, while noting that Turkey will do its best to ensure peace and security for the people of Syria. From the Russian side, President Vladimir Putin ordered state-of-the-art air defense missile systems to be deployed at a Russian air base in Syria, as Russian officials expressed fury over Turkey's actions and spoke of retaliatory measures that were likely to include curbing travel by Russian tourists to Turkish resorts.

But the Russian response was also carefully calibrated. There was no sign Russia wanted a military escalation or to jeopardize its main objective in the region: to rally international support for its view on how the conflict in Syria should be resolved.

With regards to the downing of the Russian warplane by Turkey on Tuesday, Erdoğan said that the jet was shot in Turkish airspace but crashed inside Syria. He said that parts of the downed Russian warplane landed inside Turkey, injuring two Turkish citizens. He noted that Turkey did not know the identity of the jet before shooting it down.

He later dismissed Russia's claims and stressed that there are no DAESH terrorists in the Bayırbucak region of the Latakia Governorate in Syria and underscored that Turkmen civilians lived there. "Some say there is DAESH in that area. There are no DAESH terrorists in Bayırbucak region of Latakia, DAESH is in Jarablous" Erdoğan said at a meeting of the Standing Committee for Economic and Commercial Cooperation of the Organization of the Islamic Cooperation (COMCEC).

During his address, the president called DAESH, al-Qaida, Boko Haram and al-Shabaab shadowy structures and criminal networks. "Their priority is to kill those Muslims who do not share their views. They damaged Muslim countries, our values, the best work of our culture, libraries, scholars and schools," Erdoğan said, calling for a united front against these terrorist networks.

Prime Minister Ahmet Davutoğlu on Wednesday also criticized Russia's operations against Turkmens in northern Syria, saying attacks on Turkmens could not be carried out under the pretext of fighting DAESH.

Speaking at the first parliamentary group meeting of the new AK Party government, and a day after Turkey downed a Russian jet near the Syrian border, Davutoğlu said Ankara was keeping communication channels open with Moscow.

Davuoğlu said the government did not want to fuel tensions with "our friend" Russia.

"We have no intention to strain (ties) with the Russian Federation," he said and added that Russia is Turkey's friend and neighbor.

"We have very strong economic, commercial and cultural bonds with Russia," he said, adding that Turkey does not have an eye on any country's soil. "Targeting Russia or any other country is out of the question" he said.

But he warned that it was Turkey's "natural right" to protect its borders and national security.

Amid Russia's recent attacks, Turkey summoned the Russian envoy and drew attention to concerns regarding Russia's attacks on civilians in the region.