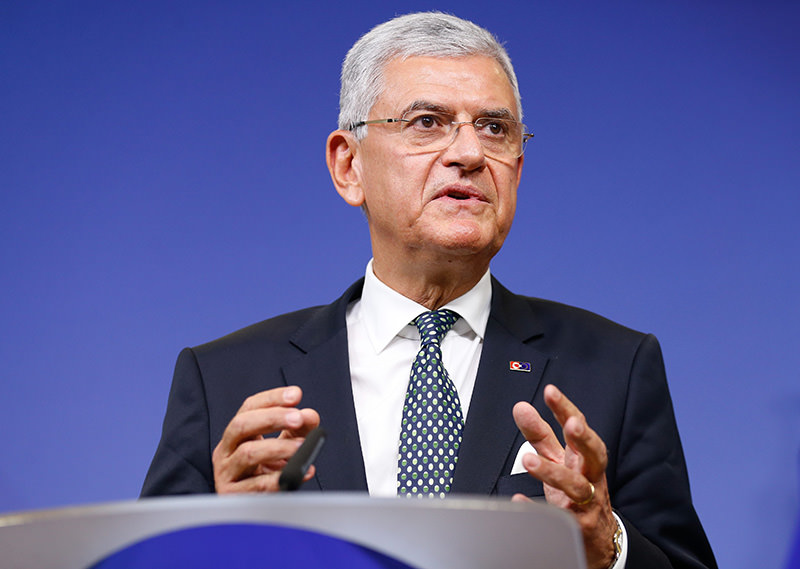 Turkish Minister for EU Affairs and Chief Negotiator Volkan Bozku0131r attends a press conference at the European Commission in Brussels, Belgium, 03 December 2015 (EPA photo)
by Ali Ünal Dec 04, 2015 12:00 am
EU Minister and Chief Negotiator Volkan Bozkır said that unlike their stance during the 2004 Annan Plan, the Greek Cypriot administration is intent on finding a permanent solution to the Cyprus issue and there are three factors to account for their new attitude. The Cyprus issue remains the biggest obstacle to success for Turkey's EU membership bid, since 13 chapters out of 35 were blocked by the Greek Cypriots. There is a mutual desire in Turkey and the EU to revitalize Turkey's accession process, after the two sealed the historic Refugee Action Plan on Nov. 29 in Brussels.

Nevertheless, the acceleration of Turkey's membership process will not be possible unless both the Greek and Turkish Cypriot administrations reach a compromise for the reunification of the divided island.

However, Bozkır is optimistic about the reunification process and says there are three fundamental factors that have encouraged Greek Cypriots to find a permanent solution in Cyprus. "First of all, in 2004 the Greek Cypriot leader was opposed to reunification, but today both Turkish and Greek Cypriot leaders lean towards reunification. Also, 10 years ago there existed a wealthy community on the southern side, which ensured their EU membership; but the income gap difference in the Turkish side has significantly reduced over the past 11 years. Thus, today's situation is more suitable to unification. Secondly, the island needs clean water and we [Turkey] provide this for them [the southern Cypriots]. After unification, the clean water, which is provided by Turkey, will be under the management of the island.

Lastly, gas reserves are another important subject for the island. It is difficult to connect or transport the gas without using Turkey. To conclude, these three factors and good relationships between the two sides' presidents increase our hopes for reunification," Bozkır told Daily Sabah on Friday after the completion of a two-day working visit to Brussels.
Last Update: Dec 04, 2015 8:39 pm
RELATED TOPICS