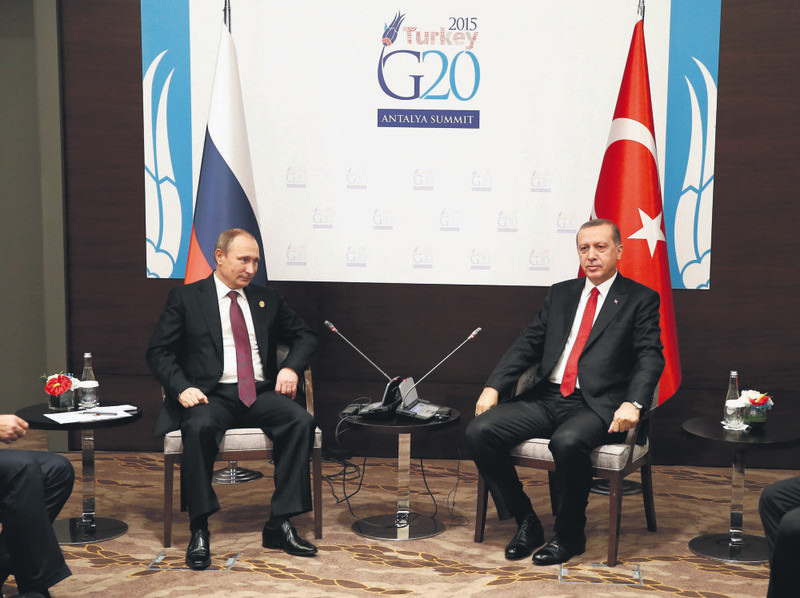 Russian President Putin (L) and his Turkish counterpart Erdou011fan pose for the media before their talks during the G20 Summit in Antalya on Nov. 16.
by Merve Aydoğan
Dec 05, 2015 12:00 am

While Russia pays no attention to Ankara's efforts to calm the tension between the two countries after Turkey downed one of its military jets, Russian academics told Daily Sabah that it is Moscow who will suffer from the sanctions imposed by the Kremlin on Turkey

Russia's decision to escalate the tension with Turkey by imposing new economic sanctions every other day will eventually backfire on ordinary Russians and their government, Russian experts said.Despite Ankara's calls on the Kremlin to de-escalate the tensions in order to not further damage bilateral ties, the Russian side has sustained its uncompromising stance ever since Turkey shot down its figher jet that violated Turkish airspace despite repeated warnings.

Prominent academics speaking to Daily Sabah said that the relations will not recover anytime soon. Dr. Dimitri Trenin, the director of the Carnegie Moscow Center, said that as the relationship is broken and will not recover soon, there is also an obvious breach of trust between the two leaders. Responding to bilateral relations between Turkey and Russia, Dr. Trenin further said "Turkey and Russia are at loggerheads on such issues as the future of Syria and the fate of Assad; the role and position of the Kurds in Syria; and the ways of dealing with DAESH. There are other issues as well. Russia's military intervention undercut Turkey's policies in Syria, and this is the real cause for the break."

Additionally to Trenin's remarks, Dr. Taras Kuzio, an academic who is an expert on crime and security in Ukraine, Russia and post-communist states, also spoke to Daily Sabah where he said, "Putin's actions are better explained by a psychiatrist." Dr. Kuzio further said that the relations between Turkey and Russia would not return to its initial stage due to five reasons that firstly include "Putin opening a Pandora's Box of nationalism and anti-Turkish xenophobia that is deeply rooted in Russian national identity. Secondly, Russia is a declining great power and Putin is a frustrated and angry leader who is always seeking domestic and foreign enemies."

Kuzio also added "the third is Turkey being friendlier to the Ukraine due to relations with NATO, sympathy for the history and plight of the Crimean Tatars and support for the territorial integrity of states. Fourthly, Russia is inherently hostile to the Tatars and most Russians believe the Stalin myth that they were Nazi collaborators and it was correct to deport them in 1944, when half of them died. Fifthly, Turkey has threatened to give additional support to Azerbaijan to reclaim the Nagorno-Karabakh region occupied by Armenia." Adding to the previous statements, Maria Snegovaya, who is a prominent academic and author, stated that the initial response of Vladimir Putin was extremely emotional. Snergovaya further said the downing of the jet will lead to some reduction in the relationship between the two countries, though it still depends on the diplomatic negotiations between Putin and President Recep Tayyip Erdoğan.

Russia to suffer more from the sanctions imposed on Turkey

In regards to the economic sanctions toward Turkey from the Russian side, Snegovaya said that the Turkish economy is far more diversified than Russia's and should be more robust to serious external shocks. She continued on by adding that, "while both countries are extremely important trade partners for each other as Turkey is Russia's fifth most important trading partner, Russia is Turkey's third most important trading partner. Russia's economy will likely suffer more. In Russia, the bans will just additionally worsen an overall bad economic situation."

Similarly to Snegovaya's response, Dr. Trenin said that as is always with such issues, both sides will suffer. However he added, "Turkey may feel the impact more, Russia a bit less, but the dislocations will be palpable." Dr Kuzio stated that "since Russia is a petro mafia state completely reliant on the export of raw materials and energy, Russia's economy will undoubtedly suffer far more." He also added that through the sanctions and travel bans, Russia is more isolated, with a declining number of foreign allies. Despite some of the analysts drawing parallels to the beginning of the First World War due to Russia's threatening adventure in foreign lands, first with the Caucasus with special emphasis on Georgia, then on Eastern Europe with special emphasis on Ukraine and Crimea and now in the Middle East with the all-out Russian intervention in Syria, experts have all indicated that a third world war is unlikely. As Snegovaya said, "Russia has no capacity for participating in a large scale war and it is interested in fostering destabilization in the world, especially in the Middle East, as that might contribute to an increase in the oil prices, so it will undoubtedly keep fueling the conflicts everywhere." Dr. Trenin also said that, "Russia and the United States will not consciously collide over Syria, or Ukraine. There is a danger though of inadvertent collisions, so risk-reduction, confidence building and channels of communication should be the order of the day." Dr. Kuzio has also commented similarly to his colleagues as he said that 'such war is unlikely as Russia would not be able to defeat NATO. '

Further responding to the fate of the pipeline agreement between Turkey and Russia, Snergovaya said, "Russia's response was emotional and the Russian state typically imposes damage on its own population (such as products or tourist bans) but tends to preserve large state-level projects – be it nuclear power stations or a pipeline." She also reminded about Russia's Minister of Economy Alexey Ulyukaev's, statements as he has suggested that the project will continue. Similarly to Snergovaya's response, Dr. Kuzio said, "Russia will continue to supply gas because it knows that if it decides to start a gas blockade then Turkey will receive gas from Azerbaijan. I doubt Russia will halt the construction of the plant, as it would bring a lot of income and corruption to Russia."