Assad must leave, or be forcibly removed, Saudi FM says 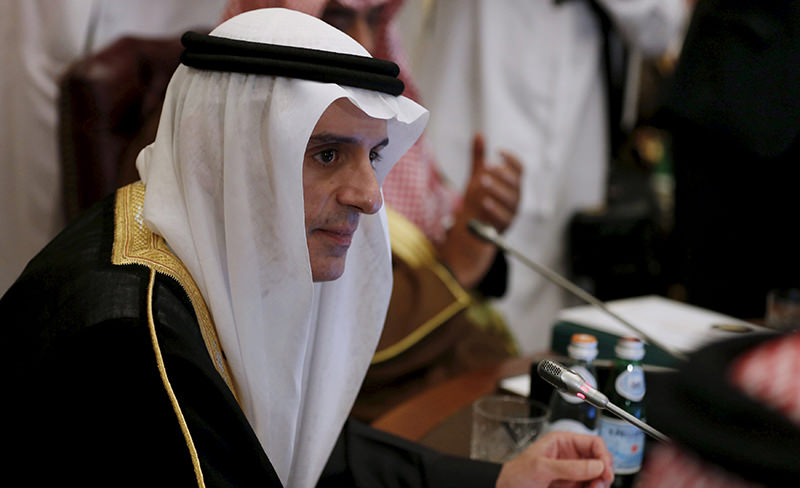 Saudi Arabia's Foreign Minister Adel al-Jubeir attends a meeting for Gulf states Foreign Ministers in Riyadh, December 7, 2015 (Reuters Photo)
by Daily Sabah with Agencies Dec 10, 2015 12:00 am
Syrian President Bashar Assad has two choices, "either to leave through negotiations" or be forcibly removed from power, the Saudi foreign minister said on Thursday, arguing that the Syrian people would not accept any other outcomes.

Speaking to reporters during a two-day meeting of Syrian opposition groups taking place in the Saudi capital, Riyadh, Adel al-Jubeir said he hoped the various factions can come up with a common vision for Syria.

"As I said before, Bashar Assad has two solutions: Leave through negotiations, which is easier and better for all. Or he will have to leave through fighting because the Syrian people refuse that this regime and person stays in power," he said.

Al-Jubeir said the Riyadh convention aimed to put the opposition in a "stronger position" by agreeing on shared principles for future peace negotiations. He added that he wanted to remove any opportunity for critics to accuse the Syrian opposition of being too fragmented and lacking a vision for the future.

Dozens of Syrian opposition groups and factions gathered in a meeting held in Riyadh, Saudi Arabia, the capital of the staunch ally of the groups, to forge a unified front against Syrian President Bashar Assad, whose fate is going to be discussed by world powers in Vienna in January.

Most of the main opposition groups participated in peace talks for the first time since the beginning of the almost five-year-long crisis and getting rid of Assad, who has been given a new lease of life by Russian and Iranian intervention, is crucial for the groups.

Saudi Arabia has been a key backer of opposition blocs pushing for Assad's ouster throughout the nearly five-year Syria conflict. Among those participating in the meetings in Riyadh are groups such as Jaysh al-Islam and Ahrar al-Sham, who had long rejected any negotiations with Assad's government while he remained in power.

The largest bloc at the meeting, with around 20 delegates, is the Western-backed opposition group known as the Syrian National Coalition. Also in attendance are representatives of the Syria-based National Coordination Body, an organization sometimes accused by other opposition members of being too conciliatory toward Assad's government.

Meanwhile, buses carrying Syrian opposition fighters and their families safely reached the northwestern city of Idlib on Thursday after withdrawing from Homs under a local ceasefire agreement, the Syrian Observatory for Human Rights said.

The United Nations presided over the implementation of the deal, which the mayor of Homs said involved 300 fighters and 400 members of their families leaving Waer, the last rebel-held area of the city that was a center of the uprising against the regime earlier in the conflict.

The Observatory said about 750 people had left, including fighters from the al Qaeda-affiliated Nusra Front and fighters linked with DAESH.
Last Update: Dec 10, 2015 4:16 pm
RELATED TOPICS