Withdrawal of Turkish troops from Iraq out of question, President Erdoğan says 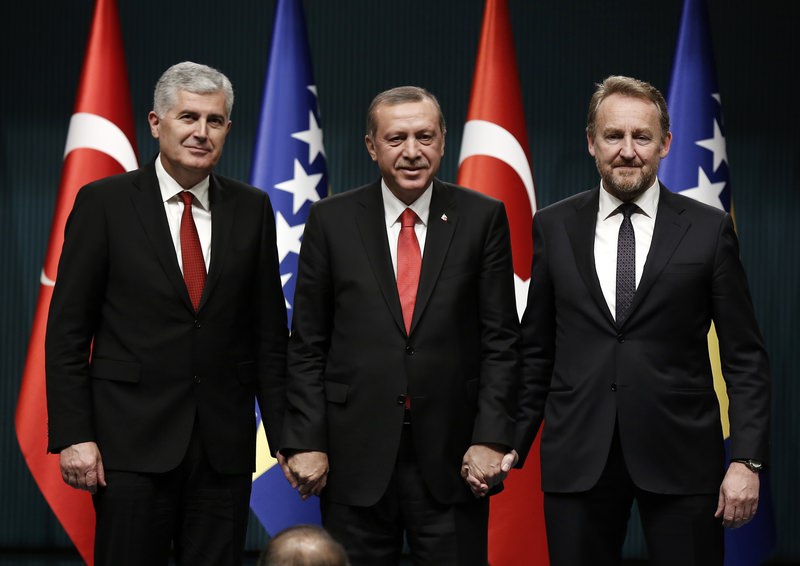 President Erdou011fan, (C), Chairman of Bosnian tripartite Presidency Covic, (L), and member of Bosnian tripartite Presidency Izetbegovic pose for photographers in Ankara, Turkey, Thursday, Dec. 10, 2015. (AA Photo)
by Daily Sabah Dec 10, 2015 12:00 am
President Recep Tayyip Erdoğan said Thursday that withdrawing Turkish troops from Iraq is out of the question and added the soldiers are in Iraq as part of a training mission.

Speaking at press conference with Bosnian and Croatian members of the Presidency of Bosnia and Herzegovina, Bakir Izetbegovic and Dragan Covic, Erdoğan said the deployment of Turkish troops dates back to 2002 and the additional troops were deployed in 2014 in response to a request from the Prime Minister of Iraqi government, Haider Abadi.

"Turkish troops in Mosul are not there as combatants, they are trainers. Their numbers may vary depending on the size of Kurdish peshmerga troops. It is out of the question, for now, to pull them out," he said.

Erdoğan also commented on Russia's proposal to the United Nations Security Council (UNSC) to issue a statement against Turkey's deployment of Turkish troops, saying "The UNSC rejected the proposal, we will follow the process regarding the incident. However, Turkey has chosen to cooperate with the international coalition against Daesh."

Reminding that Turkey shares 911 and 390 kilometers-long borders with Syria and Iraq respectively, Erdoğan said the current situation in neighboring countries carries vital importance to Turkey and added Russia has to explain its presence in Syria since the country doesn't share any border neither with Iraq nor Syria.

On Tuesday, Russia's United Nations ambassador said he told the U.N. Security Council that Turkey was acting "recklessly and inexplicably" by sending troops across the border into Iraq without the consent of the government.

However, the United States and other Western members of the Council have refused to call ally Turkey to order or reaffirm Iraq's sovereignty.
Last Update: Dec 10, 2015 9:27 pm
RELATED TOPICS