Russia's Putin sees no hope to repair relations with Turkey 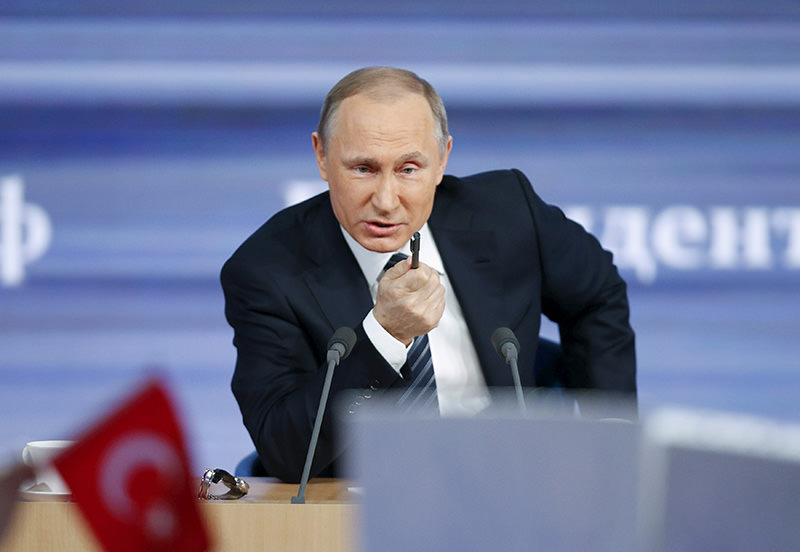 by Daily Sabah with Agencies Dec 17, 2015 12:00 am
Despite Ankara's attempts to ease tensions with Moscow, Russian President Vladimir Putin said he sees no hope for repairing relations with Turkey and continued his threats and aggressive rhetoric in the annual press conference held on Thursday with over 1,400 journalists.

"It is hard for us to reach an agreement with the current Turkish leadership, if possible at all," Putin said, adding that Turkey's downing of the Russian warplane was "an act of enmity," the reasons for which he did not understand. NATO, the U.S. and several EU states confirmed Ankara's documents that show that despite 10 warnings, the Russian warplane violated Turkish airspace. "What have they achieved? Maybe they thought that we would run away from there [Syria]. But Russia is not such a country," Putin said.

Russia has increased its presence in Syria and deployed air defense systems. Putin said that Turkey would likely not be able to penetrate Syrian airspace, revealing an aim of deploying S-400 air missile defense systems in Syria. Russia had earlier acknowledged that the system was deployed to protect its own aircraft.

On Syria and its president, Bashar Assad, Putin said that he would never agree to any outside force deciding who should rule Syria and that there is no way to resolve the Syria crisis other than a political solution. He said that Moscow supports, in general, Washington's initiative to prepare a resolution on Syria at the U.N. Security Council, adding that the draft resolution is acceptable as a whole. When asked about Russia's future presence in Syria, Putin said that he does not know if Russia will need its military base in Latakia, a Syrian port located in the northeast and a province partly inhabited by Turkmens, after its bombing campaign ends. He added that Moscow possesses weapons powerful enough "to hit anyone" thousands of kilometers beyond Russia's borders.

Hours after the Russian Defense Ministry reported that one of its ships, the destroyer Smetlivy, fired a warning shot to avoid a collision with a Turkish fishing vessel 22 kilometers from the Greek island of Lemnos last week Sunday, Foreign Minister Mevlüt Çavuşoğlu said that Turkey is "not in favor of tension."

"We have read the Russian statement," Çavuşoğlu told reporters in Rome, where he had been following an international conference on Libya. "But we are always saying [that] we are not in favor of tension. We are in favor of overcoming tension through dialogue," Çavuşoğlu added, claiming that Ankara's initiatives following "the sad event [of downing the Russian warplane] of Nov. 24 had always been in that direction."

In Thursday's news conference, Putin has also commented on Donald Trump's running for presidency as the Republican presidential candidate. The Russian president praised Trump's talents and lauded his calls for better ties with Russia.

Putin called Trump an "absolute front-runner" in the presidential race and a "bright and talented person." He added that he "certainly welcomes" Trump's calls for better U.S.-Russia ties.

Putin had said earlier he was ready to work with the eventual winner in the presidential race. And Trump has said he could work with the Russian leader.

"I think that I would probably get along with him very well," Trump said of Putin in an October interview with CNN. "And I don't think you'd be having the kind of problems that you're having right now."

Regarding the stalemate in Donbass region in eastern Ukraine and ongoing clashes between Russian separatists and Ukrainian army, Putin said Kiev have not been completely fulfilling aspects of Minsk deal relating to special status for eastern regions.

He urged the Ukrainian government to swiftly approve legislation on holding local elections in Ukraine, but he says the Ukrainian authorities were dragging their feet on the issue. He added Russia wants the conflict settled and is ready to use its influence with the rebels in eastern Ukraine to reach a compromise.