Turkish troops to stay in Afghanistan, as long as Kabul wants, Erdoğan says 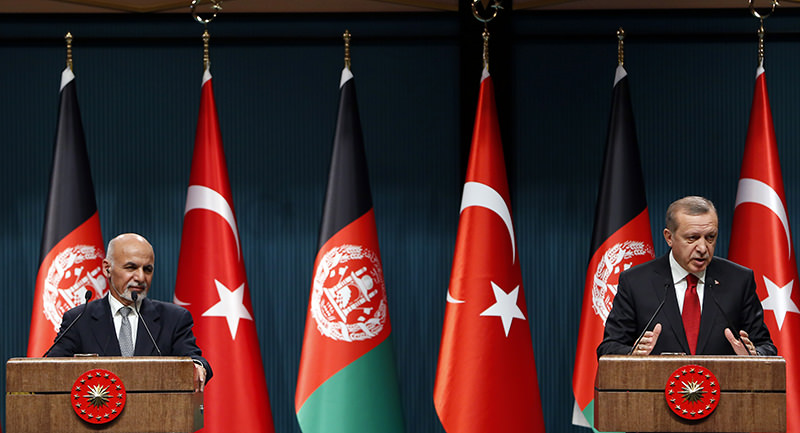 | AA Photo
by Nurbanu Kızıl Dec 24, 2015 12:00 am
President Recep Tayyip Erdoğan said on Thursday that Turkish troops in Afghanistan will stay there for as long as the Afghan administration desires, while underscoring the close relations between the two countries.

Speaking in a joint press conference with his Afghan counterpart Ashraf Ghani at the presidential palace in Ankara, President Erdoğan said that Turkish troops will continue to stay in Afghanistan to ensure permanent domestic peace and stability.

"Turkey is the greatest supporter of the Afghan national unity government, Afghanistan's problems are our problems, and their success is our success," Erdoğan said, and added that Turkey will continue to provide development assistance to Afghanistan.

The president also highlighted that Afghanistan has achieved tremendous progress in a number of fields over the past 14 years despite negative conditions.

He urged the international community to stand with Afghanistan during its transformation and provide support in terms of development and security.

"I hope that the efforts to establish permanent peace and stability bring success," Erdoğan said, and added that the fight against terrorism in Afghanistan, Turkey and Pakistan will positively affect all three countries.

Turkey deployed troops to Afghanistan following the Al-Qaeda linked Istanbul bombings in 2003. It leads the Regional Command Capital, provides security in the Afghan capital and Wardak Province. Turkish troops in Afghanistan are not engaged in combat operations despite pressure from the United States to deploy more combat troops.

Turkey also acts as a mediator between Afghanistan and Pakistan on terrorism-related issues.