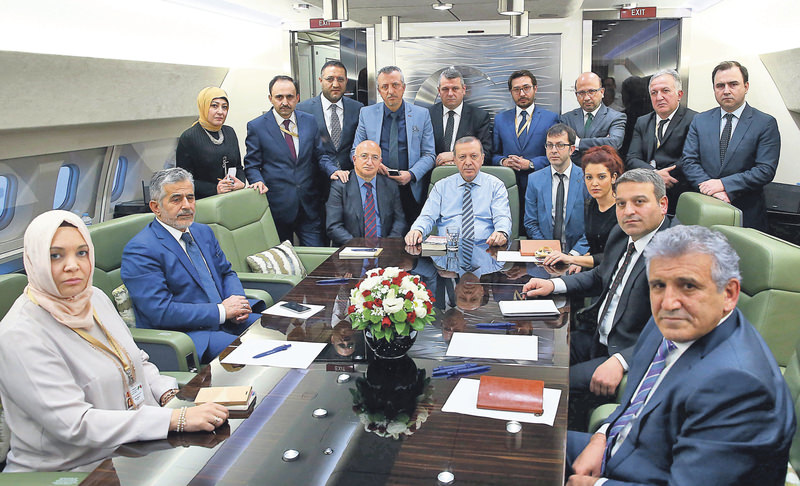 President Erdoğan said improvement of ties between Israel and Turkey would benefit both countries, the but added that preconditions set by the government stood. He also said that ties with the U.S. remain robust and strategic policies of the two countries were aligned

President Recep Tayyip Erdoğan, speaking to journalists on his flight back from an official trip to Saudi Arabia Thursday, said a just agreement between Israel and Turkey would alleviate Palestinians' suffering and that both countries should admit that they need each other. "What is a just agreement? It is the satisfaction of the preconditions we have voiced in the past. Israel needs a country like Turkey in this region. We, too, should admit that we need a country like Israel. This is a regional fact. We need to see it. If both sides implement necessary measures based on mutual sincerity, normalization will naturally ensue," Erdoğan said.

Ankara has tied the lifting of the blockade of the Gaza Strip and an apology and compensation for the families of the victims of the Mavi Marmara flotilla raid to any warming of bilateral relations. While Israeli Prime Minister Benjamin Netanyahu has apologized for the incident and there are currently discussions over compensation, the Gaza blockade remains the principal sticking point. Turkey had to think about the plight of Palestinians, Erdoğan said, adding: "There is no water or electricity there. Problems are not solved through shouting or fights. Months pass and the problems remain. We will soon finish the building of a hospital there. Under normal circumstances, it would have finished already."

Erdoğan told the journalists that the preconditions for any normalization of ties with Israel are known to all. "We need to send a ship that will provide electricity to Gaza. On the issue of the embargo, they [Israel] said that they would lift it if materials went to Gaza via Turkey. I told my friends that I could not comment on anything before seeing it in writing. A written text will ensure there will be no deviation from any agreement. Another issue dear to our hearts is an end to the violation of the sanctity of Al-Aqsa Mosque compound."

He also said that the electricity infrastructure in Gaza needs urgent repairs, which will be undertaken as soon as possible.

IN DIRECT COMMUNICATION WITH OBAMA

Erdoğan admitted that Turkey and the U.S. fail to see eye to eye in some instances but there had never been a total rupture in diplomatic relations. He said the policies followed by the two countries are aligned with respect to many regional and global issues.

"[U.S. President Barack] Obama calls me and I call him. We are in direct communication with each other. I also need to note that I will be in the U.S. on March 31 to attend the Nuclear Security Summit. During the trip I hope to open the mosque compound in Maryland with Obama. If his program does not allow it, I will open the compound, which will be an important legacy to leave behind us. I believe future generations will be grateful for the structure."

When asked about the current presidential race in the U.S. and Donald Trump's lead among the Republican candidates, Erdoğan said it would not be appropriate for him to comment, but said he believed the Turkish government's relations with U.S. administrations, whether Republican or Democrat, had always been good and the same would hold true no matter which candidate becomes president later this year.

Erdoğan then went onto share his impression of his official trip to Saudi Arabia. He said he was saddened over the death of Yeni Akit Editor-in-Chief Hasan Karakaya, who he described as a much-loved friend.

Erdoğan said the most important development to come out of the trip was the decision to establish a High-Level Strategic Cooperation Council, which will bring together top officials of both countries twice a year to discuss ways to increase diplomatic, military, cultural and economic cooperation. "The priority will be to improve trade and defense ties. The current Saudi investment stands at $2 billion. There are discussions to increase it, along with Turkish investments there. We can also develop strong cooperation on energy."

He said another important issue discussed was to improve cooperation against terrorism. "It is important for countries that are part of the Islamic world to cooperate on this issue," he said, underlining the significance of the agreement in Riyadh on a military alliance between Muslim countries. He said the alliance's main target was terrorism and the cooperation would entail security, intelligence and military facets. "Efforts to prevent the exploitation of religious values and cooperation against Islamophobia are also part of the mandate. Negotiations will make its content clearer. Right now, 37 countries are included in the alliance. This number will increase. The center will be in Riyadh."

When asked whether Syria or Iraq would be part of the alliance, Erdoğan said: "The alliance is aimed to combat terrorism. It's not sectarian. Just like within the Islamic Cooperation Organization, where there are Shiite and Sunni members. We can all see how sectarianism can wreak havoc in countries, as evidenced by the state of Syria, Iraq and Iran."

He criticized Iraq for taking an aggressive stance toward Turkey once Turkish-Russian ties deteriorated. "Iraqi Prime Minister [Haider] al-Abadi told Prime Minister Ahmet Davutoğlu to withdraw the Turkish troops from the Bashiqa camp. The prime minister gave the appropriate answer to his Iraqi counterpart, asking him to first eliminate DAESH terror. I could also add the PKK presence in the Qandil Mountains."

Erdoğan also shared his disappointment in Iran's recent stance, noting that Turkey stood by Tehran throughout the nuclear negotiations, trying to find a peaceful way out of the problem. "We do not see Iran's sectarian actions in Syria, Yemen and Iraq as positive. I always told Iranians that all of us are Muslim. We never see issues as inherently Shiite or Sunni."

On ties with Russia, he said Moscow's sanctions would hurt Russia more than Turkey, adding that other markets will become available to Turkish goods. "We believe the Russian measures will harm the good ties between the two countries and are a diplomatic mistake by Russia."

He described remarks on self-governance by Peoples' Democratic Party (HDP) co-chairs Selahattin Demirtaş and Figen Yüksekdağ as criminal in nature and supported the investigations launched into their statements. "However, no one should consider closing down political parties. However, party members, mayors, deputies or others that commit crimes can be tried. I believe the lifting of parliamentary immunity of those who are under investigation will also help the country. We cannot accept any remark that calls for the break-up of the country. There can be no tolerance for a state within a state."

On the recent meeting between Davutoğlu and the Republican People's Party (CHP) Chairman Kemal Kılıçdaoğlu as part of a new process to negotiate a new constitution, Erdoğan said the ruling Justice and Development Party (AK Party) had pledged to work on a new charter soon after the elections and Davutoğlu is doing just that. "However, I should say that the most important factor in preparing such a document is to ensure it is based on a national consensus, and that can only be achieved if parties participate in the process. If so, the majority of the nation will stand behind it and we will put an end to the legacy of the [1980] military coup."

He said discussions should also focus on transforming the country's governance into a more effective system. "When we look at developed countries, we see presidential or semi-presidential systems. I believe if we can achieve this, Turkey will progress to a better level. There are concerns that such systems lack the necessary checks and balances. It's just the opposite. In presidential systems, checks and balances are much stronger. Another issue is parliamentary bylaws, which seriously block progress in Parliament. You cannot pass laws that you need to. If we replace it, our Parliament will become more efficient."
Last Update: Jan 03, 2016 10:12 am
RELATED TOPICS