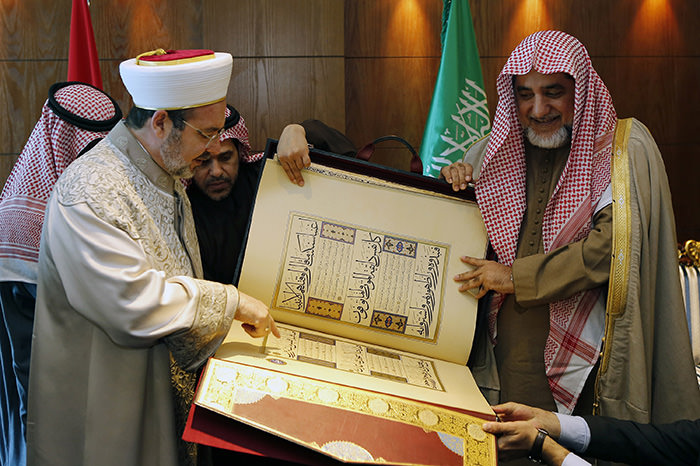 Görmez and al-Sheikh voiced calls for religious unity and Görmez praised Saudi Arabia for being "one of the greatest countries that preserves itself against sectarian strife and maintains national integrity."

He also emphasized the need for cooperation on Syria, especially with regarding the education of displaced Syrian refugees who took shelter in Turkey and other countries in the region. "Syrians need to be able to preserve their Arab and Muslim identity," he said, adding that cooperative efforts should not only be confined to the conflict in Syria. "Saudi Arabia exerts its efforts to aid Muslims in Europe, the Balkans and other regions. If Turkey and Saudi Arabia can coordinate their efforts, it would be better," Görmez told al-Sheikh during their meeting.

Echoing the sentiment of his counterpart, al-Sheikh acknowledged that the Muslim community is divided and spoke about the current conflicts among its members. "We can overcome this only by remaining loyal to religion of Allah and way of Prophet Muhammad. Allah wants the faithful not to be divided by strife. We have to stand united. Turkey and Saudi Arabia have historical ties and I hope our relations will sustain justice and brotherhood. Saudi Arabia will always be on Turkey's side," he said.

The two countries have kept close ties, especially since Saudi Arabia's King Salman came to power in the Kingdom. Before visiting Saudi Arabia, Görmez went to Iran in December to attend a conference on Muslim unity. Ties between Saudi Arabia and Iran, Turkey's eastern neighbor, have considerably deteriorated since the execution of an influential Shiite figure by Saudi Arabian officials on Jan. 2. In a speech he gave in Iran, Mehmet Görmez reiterated his calls to end sectarian strife that currently divides Shiite and Sunni Muslims. "It is the blood of Muslims that is being shed. It doesn't matter whether the victims are Sunnis or Shiites," Görmez said in a conference held in Tehran.