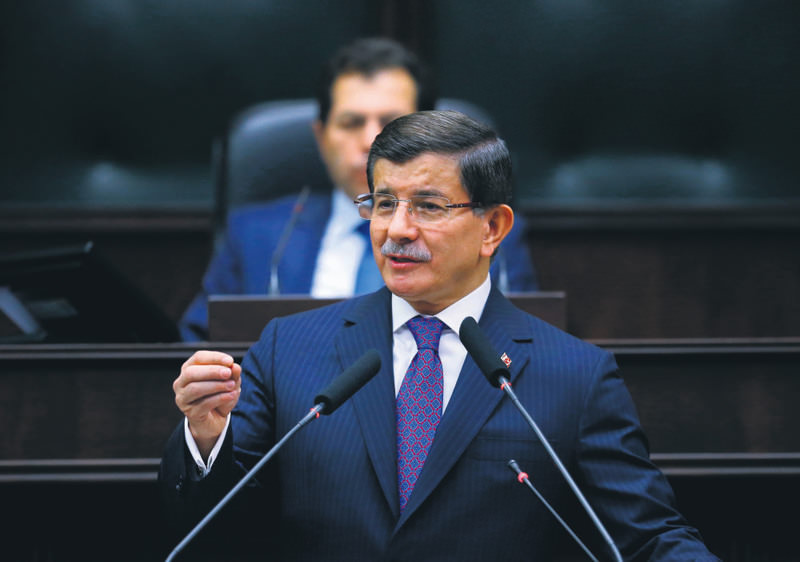 Concerning the latest rift between Saudi Arabia and Iran, PM Davutoğlu emphasized that diplomatic missions should be protected from all conflicts and voiced the necessity of easing the tensions through diplomatic means

Prime Minister Ahmet Davutoğlu condemned attacks on Saudi missions in Iran, calling on Saudi Arabia and Iran to use diplomatic channels to resolve disputes and said that Ankara is ready to do whatever it can to resolve the current tension between the two countries. "The tension that started with the execution of Shiite cleric [Sheikh Nimr al-Nimr] along with 44 al-Qaida members in Saudi Arabia escalated after protestors set fire to Saudi Arabia's Embassy in Tehran and consulate building in the city of Mashhad. Diplomatic missions are under the protection of international treaties and must be secure from all kind of conflict," Davutoğlu said at a Justice and Development Party (AK Party) group meeting in Parliament on Tuesday in Ankara. "As a country that has suffered from the same problem in the past we cannot accept the attack on diplomatic missions regardless of whatever the reason. We strongly condemned these attacks," he said. In line with Davutoğlu's remarks, on Tuesday the Foreign Ministry also condemned the recent attacks on Saudi Arabia's missions in Iran. "As per the Vienna Convention on Diplomatic Relations [1961], diplomatic and consular mission buildings have total immunity, and countries that accept this convention have the responsibility of providing security for these missions," the Foreign Ministry said in a statement released on its website.

Rising tensions between Saudi Arabia and Iran have raised concerns about the possibility of larger scale sectarian war in the region. However, experts believe that it is unlikely for the tensions between the two countries to create further sectarian war. Muhittin Ataman, the deputy coordinator of the Ankara-based Foundation for Political Economic and Social Research (SETA), said the possibility of an increase or decrease of a regional sectarian war depends on the policies of the global powers in the region, and added: "The reaction from the U.S. has caused a decrease in tensions. Otherwise the developments in the region could've gone out of control." Prominent Iran expert Dr. Bayram Sinkaya from Yıldırım Beyazıt University also said there is little possibility of a regional, sectarian war. Sinkaya said: "Bilateral relation between Iran and Saudi Arabia were already quite tense. The latest developments have only made this tension more apparent. However, I do not believe that these tensions could turn into a close combat situation at the moment."

Galip Dalay, a research director at Istanbul-based al-Sharq Forum, believes that Iran has immensely contributed into the sectarianism in regional politics, investing in the Shiite community in the Arab world and utilizing them as a political chip in its dispute with Arab countries. "This has created sensitivity and backlash in particularly Sunni-majority Arab countries. The fact that Iran has almost exclusively focused on the execution of a single personality [Nimr], out of 47 people that were executed by Saudi Arabia, illustrates the sectarian nature of its politics and reaction to this execution," he said.

Regarding Ankara's contribution to ease tension between two countries, Ataman said that despite tensions diplomacy is still possible and it may help to reduce the tone or even help to postpone it. "If this tension turns into war, all countries, including Turkey, will be at a loss. Therefore, Turkey urges the sides to find a diplomatic solution," he said. Dalay, however, said that Turkey can play a role in this dispute with the caveat that it be a limited one: "Turkey enjoys increasingly amicable relations with Saudi Arabia, but the nature of its relations with Iran can be described as a rivalry or adversarial. That reduces Turkey's option of playing the go-between role. Also, both countries' positions toward each other are informed by real political reading and geopolitical calculations. This further reduces the prospect of further de-escalation of tension. Unless Saudi Arabia and Iran strike a 'modus vivendi' in the region, the prospect of de-escalation of tensions between the countries will remain limited."
RELATED TOPICS