Turkey disturbed by Islamophobic discourse in US presidential race 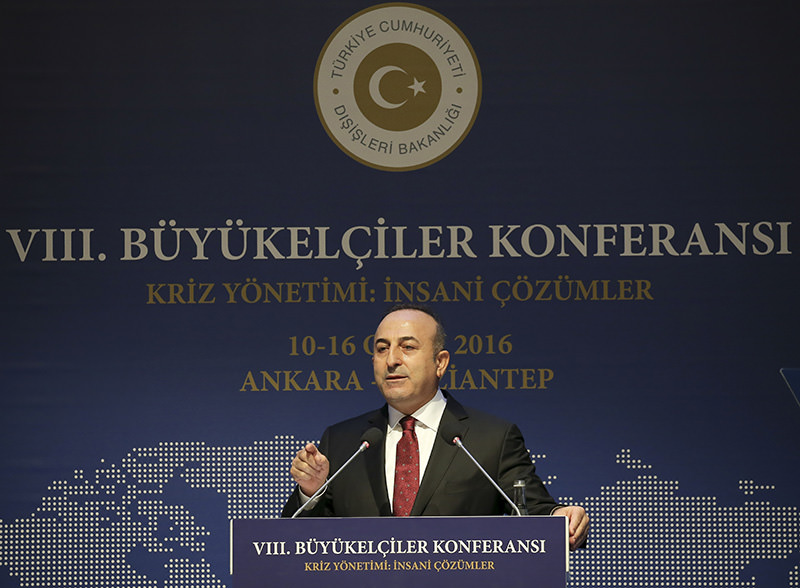 | AA photo
by Daily Sabah with Wires Jan 11, 2016 12:00 am
Turkey is unsettled by "anti-Islamic" messages in the U.S. presidential race, Foreign Minister Mevlüt Çavuşoğlu said in a wide-ranging policy speech to Turkish ambassadors on Monday.

Last month, the Republican presidential front-runner Donald Trump called for a ban on Muslims entering the United States in the most dramatic response by a candidate yet to last week's shooting spree by two Muslims who the FBI said had been radicalized.

"We have no choice," Trump said at a rally in South Carolina, warning of more Sept. 11-style attacks if stern measures are not taken.

Trump's statement on "preventing Muslim immigration" drew swift and fierce blowback from many directions, including the White House, rivals for the 2016 Republican presidential nomination, Democratic presidential front-runner Hillary Clinton and Republican former Vice President Dick Cheney, who said the idea "goes against everything we stand for and believe in."

Speaking at the eight annual ambassadors' conference in Ankara, Çavuşoğlu also expressed Turkey's stance regarding this issue, and said Turkey was unsettled by the "anti-Islamic" messages given in the U.S. presidential race.

Tension between Iran and Saudi Arabia

Another topic the foreign minister touched upon was the recent tension between Iran and Saudi Arabia. Çavuşoğlu said Turkey was ready to do what is needed to help end the tensions between these two countries, which escalated after Riyadh executed a senior Shi'ite cleric on Jan. 2 and Tehran failed to defend the Saudi embassy against an attack.

Çavusoğlu also touched upon Turkey's deployment of a force protection unit to Bashiqa camp in northern Iraq, which has caused a diplomatic row with Baghdad. He said Ankara respected Iraq's territorial integrity and that the deployment was made after security deteriorated.

On December 4, 150 Turkish soldiers equipped with heavy weapons arrived on the outskirts of the Daesh-held Mosul province in Northern Iraq to protect Turkish servicemen training Iraqi volunteers to fight Daesh terrorists. Baghdad, on the hands, demanded the withdrawal of soldiers.

No agreement yet on normalising ties with Israel

Çavuşoğlu appeared to dash any hopes of an imminent normalisation in ties with Israel, saying there was no agreement yet on Turkish demands for compensation for the deaths of 10 Turkish activists on an aid ship in 2010 or for an end to the Gaza blockade.

During his speech on Monday, Cavuşoğlu has touched upon the migrant crisis, saying that Europe had woken up far too late to the severity of the crisis.

"Unfortunately the international community heard our warnings about the migration crisis very late," Çavusoğlu said at the meeting.

"They only understood they seriousness when the body of tiny Aylan washed up on one of our beaches and wave after wave of migrants came to their own doors."