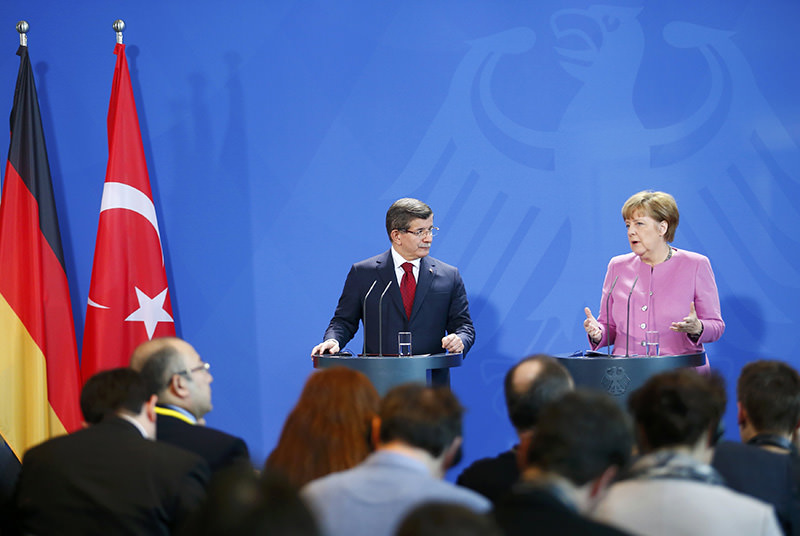 Peace talks aimed at ending the war in Syria next week will be a key element in stemming the flow of refugees to Europe, PM Davutoğlu said after talks with German Chancellor Merkel. The two crucial regional players say there is a need for solidarity to solve the ‘Syrian crisis that did not stay in Syria’

Turkey is doing its best to stem illegal migration to Europe but will keep its "open-door" policy for refugees fleeing the civil war in Syria, Prime Minister Ahmet Davutoğlu said on Friday.

Davutoğlu was speaking at a news conference in Berlin after talks with German Chancellor Angela Merkel, which followed a joint cabinet meeting between governments of Germany and Turkey.

Merkel said that she had obtained a pledge from Turkey to "do everything" to cut the record number of migrants arriving in Europe.
Davutoğlu said that Turkey increased cooperation with European border security agency Frontex and explained measures in visa regimes against third countries.

Davutoğlu thanked Merkel for raising awareness of the refugee crisis in Europe while everyone else was keeping silent. "The refugee crisis is not a problem solely for Europe, or for Germany and Turkey. It is the reflection of the crises in Syria and Iraq. If we act shoulder to shoulder, we can take this crisis under our control in the best way possible," he said, adding that Syrian peace talks will play a crucial role in ending the crisis. The prime minister said Turkey has been doing its best to address the issue of refugees for the past four years without help from the international community, and will continue to do so.

In addition, Davutoğlu touched upon the recent DAESH attack in Istanbul that claimed the lives of German citizens. Underlining that the perpetrators will be found and brought to justice, Davutoğlu said Turkey and Germany stand "shoulder to shoulder on the issue." Davutoğlu also added that whoever attempts to spoil peace and order, they will find Turkey and Germany against them.

We have a really strong will. We are resolute in protecting peace in the face of terrorist organizations such as DAESH, the PKK and the DHKP-C [Revolutionary People's Liberation Party-Front]," he further said.

Mentioning Turkey's demand to establish a safe-zone in northern Syria, Davutoğlu said less people would have lost their lives both in Syria and on their way to Europe had there been a safe-zone.

Touching on the ongoing terror operations in Turkey's southeast, Davutoğlu said he explained to the chancellor that the operations are legal and being carried out in democratic ways.
Commenting on mutual relations, Davutoğlu said both countries do not only act to sustain their own economic growth, but also aid regional countries while the global economy goes through problems. "Over three million Turks live in Germany and five million Germans visit Turkey every year. Despite threats of terrorist attacks, we stand in solidarity against these threats. The accelerated talks that started with the [Turkey-EU] summit on Nov. 29 will further strengthen EU- Turkey ties."

Chancellor Merkel said the two countries are in agreement about the political resolution of the PKK issue. "We share the same view that lives of young people there should be bettered," she added.

Underscoring that Turkey is doing a good job of hosting nearly 2.5 million refugees, Merkel said Ankara has done well in improving the living conditions for refugees. "We discussed with the Turkish government how we can collaborate on the issue," she added.

Merkel also said illegal migration should be legalized, which creates a serious problem for the European Union. "We expect first steps to be taken before Feb. 18," she further added.
[8:21]
Germany and Turkey have emerged as crucial players in the biggest migration crisis to rock Europe since World War II. The outcome of Friday's talks is not only important for Merkel, who faces intense pressure at home to impose a cap on Germany's refugee intake, but it will also have resonance across Europe, where public opinion is hardening against a record influx of refugees seeking asylum .

Despite wintry conditions, thousands of people fleeing war and misery are still embarking on the dangerous journey across the Mediterranean to seek a better life in Europe.

Turkey is most affected by the refugee crisis and expects EU countries to share the burden, Davutoğlu told German Press Agency (DPA) ahead of his official talks in Berlin. "We are not begging for money from the EU. We have 2.5 million refugees in Turkey from Syria, from Iraq 300,000 more. Turkey has spent close to $10 billion on the refugees," he said.

"There are many things to be done, together with the EU, together with the international community. But nobody can expect Turkey to carry the entire burden alone," he stressed.
At an EU-Turkey summit last November, the EU promised 3 billion euros ($3.28 billion) in aid to Turkey to support projects that would improve the living conditions of refugees in the country, and address the problems of the influx of refugees. But Italy has reportedly objected to the formula proposed for collecting the funding, which is planned to come from both the EU budget as well as from member states.

Davutoğlu said Turkey has taken initial steps as part of the EU-Turkey action plan agreed in November, namely by the introduction of visa requirements for Syrian nationals coming from third countries, and also opened the labor market to Syrian refugees in Turkey by allowing refugees to acquire working permits. Davutoğlu said during Friday's intergovernmental consultations that the Turkish and German delegations will have detailed discussions on the refugee crisis. "But at the same time we will also be talking about how to fight against terrorism, about intelligence cooperation and regional issues in Syria, in Iraq, in the Middle East and in the Balkans," he said.

Germany saw an unprecedented 1.1 million asylum seekers arrive last year, many of them fleeing conflicts in Syria, Iraq and Afghanistan. Facing growing domestic pressure, Chancellor Angela Merkel wants Turkey to help stop the flow of migrants from coming to Europe. She has urged other European Union members to make good on their pledge of giving Turkey 3 billion euros.

"Regarding bilateral issues, this will be the first such high-level, comprehensive meeting after the formation of the new government in Turkey. Of course the refugee issue will be one item on this agenda. But at the same time we will be talking about how to fight against terrorism, about intelligence cooperation and regional issues, in Syria, in Iraq, in the Middle East and in the Balkans. On the EU-Turkish joint action plan on refugees, we will talk about what we have achieved. In the past two weeks Turkey has started implementing visa requirements for Syrians coming from third countries. Also, last week we had a Turkish cabinet decision allowing Syrians to work in Turkey. On the other side, the European Union was planning to fix and finalize the resettlement plans for refugees, and also to share the financial burden," Davutoğlu told the DPA.

EU member states have been split about how to end the crisis, with Austria the latest to draw fire when it decided to impose a limit on its intake of asylum seekers.

Merkel has so far resisted demands for a quota, after nearly 1.1 million asylum seekers arrived in Germany in 2015. She has instead promised a "tangible reduction" in new arrivals, and is counting on international efforts to deliver.