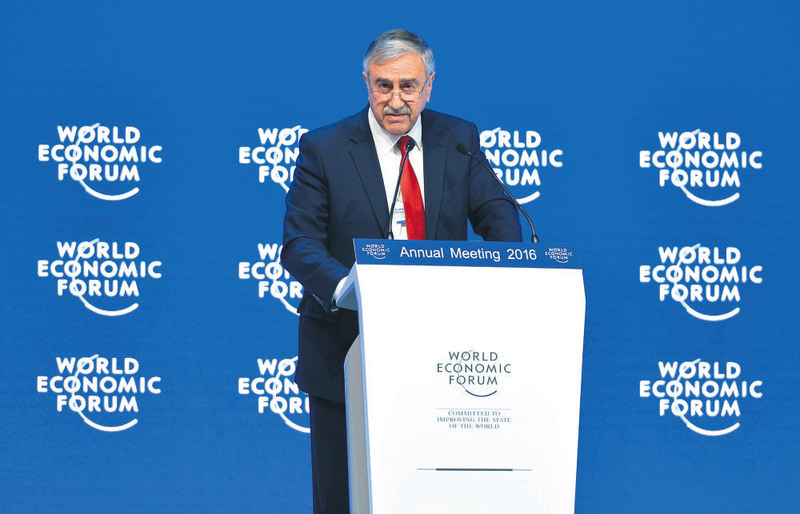 by Anadolu Agency
Jan 23, 2016 12:00 am
Turkish Cypriot and Greek Cypriot leaders reiterated on Thursday their commitment to the reunification of their divided island in 2016, and called for financial assistance from the international community.

Turkish Cypriot President Mustafa Akıncı reiterated the "strong" determination of Turkish Cypriots to reach a settlement based on a "bi-zonal federation with political equality as well as European values and principles."

"As two leaders who belong to the same generation, we are working tirelessly to achieve a mutually acceptable solution, and we are aware that this is the last trial for uniting our island," Akıncı told the Reuniting Cyprus session at the annual meeting of the World Economic Forum in Davos, Switzerland.

"At a time when Europe is enduring a deep crisis, primarily linked to the tragic events unfolding in Cyprus's immediate neighborhood, Mustafa and myself are working tirelessly to reunify our country," Anastasiades said.

The Greek Cypriot leader noted that both parties have engaged since May 2015 in intensive negotiations to reach a settlement - negotiations that had resulted so far in convergences and common understanding on main issues.

"I believe that 2016 could be the year that we end the unacceptable status quo, provided always that we continue working with determination," Anastasiades said, adding that it was important that all stakeholders and interested parties constructively support efforts in this regard.

"We do hope that we shall have the support of the international community at large, particularly with regards to substantially contributing to meet the financial aspects of the solution," Anastasiades said.

Akıncı expressed "the urgent need" to work together to make 2016 the year for a Cyprus agreement, also called for global financial assistance.

The two leaders stated their shared belief that both communities should cooperate in the exploitation of the energy fields offshore of Cyprus.

Akıncı expressed hope that the newly-found hydrocarbon resources in the Eastern Mediterranean would act as "a source of peace, stability and cooperation, rather than conflict and tension."

"United Cyprus will be able to serve as a hub for pipelines transferring natural gas to the EU through Cyprus and Turkey, which seems to be the most feasible route," he said. "Fresh water from Turkey already brought to northern Cyprus can be shared by all inhabitants of the island, and interconnectivity of electricity networks between the EU and the Middle East will become a reality via Cyprus and Turkey, which again seems to be the most efficient way."

Anastasiades, for his part, said that the discovery of hydrocarbon in the region opened up new possibilities for cooperation and synergy.

"We strongly believe that energy cooperation in the region can transform the Eastern Mediterranean into a pillar of stability, security and peace, while at the same time it can be a decisive factor to achieve energy security for the EU," he said.

The eastern Mediterranean island was divided into a Turkish Cypriot state in the north and a Greek Cypriot administration in the south after a 1974 military coup by Greece was followed by the intervention of Turkey, acting as a guarantee of security for the Turks of northern Cyprus.

In 2004, a referendum proposed by then-U.N. Secretary-General Kofi Annan was held, but reunification was rejected by the Greek Cypriot population.