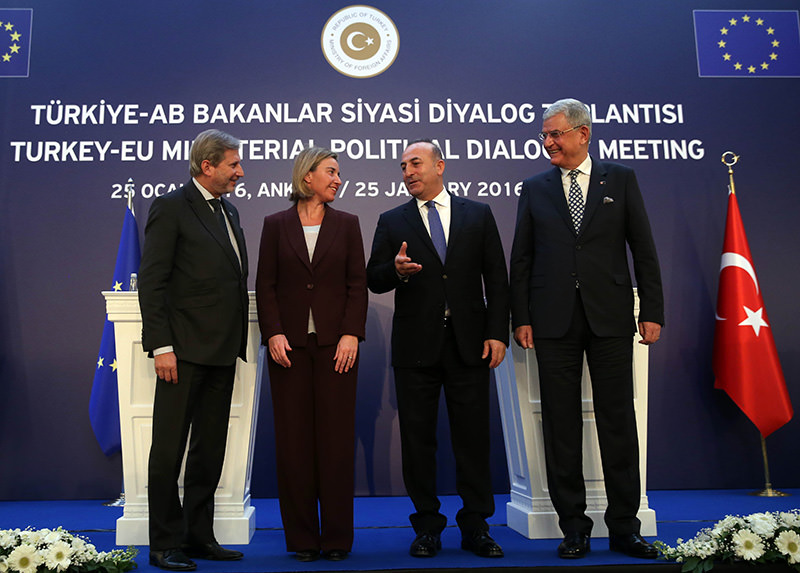 The EU’s top foreign affairs official, Federica Mogherini, said the 28-nation bloc should support Ankara more to share the burden of the refugee crisis and that the 3 billion euros pledged to Ankara will be provided soon. EU officials also condemned PKK terror in southeastern districts

The European Union has to do more to support Turkey in its work caring for refugees, the bloc's High Representative of Foreign Affairs and Security Policy Federica Mogherini said on Monday after talks with Turkish officials.

At a joint press conference with Çavuşoğlu and Bozkır at Ankara Palace State Guesthouse on Monday, Mogherini stressed the significance of comprehensive cooperation with Ankara: "We have to better support Turkey in the incredible work it is doing to host and protect an enormous number of refugees." Both Turkish and EU officials have told media members at the press briefing that official dialogue will be held more often, with two Turkey-EU summits every year.

Mogherini said that Turkey is an important regional and global partner for the EU and that regional, global and local challenges need stronger EU-Turkish cooperation. "The relation between the EU and Turkey, especially in these several months, has been seen mainly through the angle of our common concern for the refugees that we need to protect and host and also through the concern of the management of the migration flow in a coordinated way. However, the relations between the EU and Turkey go far beyond that," she said. Saying that the EU has to better support Turkey, Mogherini praised Turkey as "doing incredible work through hosting and protecting an enormous number of refugees." She said that the EU and Turkey have agreed to strengthen mutual work on the refugee crisis and that there are significant issues that Turkey and the EU have to work on together in a better coordinated way, starting with the regional dynamics.

Commenting on the ongoing Syrian crisis, she said: "We are right in the center of the most complicated setting of the global stage, starting from Syria. We are working together with the international support group to have Syria talks starting hopefully by the end of this month. It is extremely important for us that the transition process start in parallel with better humanitarian conditions on the ground. This is also the only way to beat DAESH on the ground." The Turkish and EU officials also discussed issues related to Iraq, Libya and the Israel-Palestine conflict, emphasizing the lack of a Middle East peace process.

Further providing details of their agenda, Bozkır said that along with bilateral relations they discussed counterterrorism measures. Bozkır said: "Turkey is an important example to the world regarding its combat against terrorism as it is dealing with three different terrorist organizations." Bozkır reiterated that Turkey would continue to fight terrorist organizations that threaten the country's national security, especially the PKK and DAESH. Adding to Bozkır's statements, Hahn said that Turkey was of "vital importance" in the refugee crisis. "We do not have time to lose. It is important to give Turkey significant support," he said, adding that they also raised their concerns about the importance of ensuring freedom of expression and an independent judiciary, which he described as fundamental to Turkey's bid to join the EU.

Hahn said that the EU is ready to work with Ankara on resuming the reconciliation process.

Mogherini also said that they had shared their concerns of the situation in southeastern Turkey. She said: "The EU strongly condemns all terrorist attacks, including by the PKK. At the same time we call for an immediate cease-fire to return to the reconciliation that was launched in the past years in a brave, courageous vision by the Turkish authorities. We believe that it is the only way for peace and stability in the country and also in the region."

Hahn said that the EU is closely watching whether Turkish actions are affecting the record flow of migrants to Europe after it reached three billion in a deal with Ankara to curb migration. The composition of refugees transiting through Turkey has changed, with Syrians fleeing the civil war now making up less than 40 percent, he said. Syrians were the largest group in 2015.

Mogherini added that she is very confident that the EU will deliver the agreed three billion euros to Turkey under the migrant deal in reasonable time. She stressed that the funding would be allocated to projects aiding the refugees themselves.

Çavuşoğlu said efforts to include terror groups like the YPG militia among the opposition in Syrian peace talks was very dangerous and would undermine the process.

Mogherini said the Syrian peace talks must be inclusive and that the United Nations Special Envoy Staffan de Mistura was working hard to achieve this.

Talks between the Syrian government and opposition had been due to start in Geneva on Monday, but there is uncertainty around the negotiations, partly because of a dispute over who will be part of the opposition delegation.

Bozkır said that the negotiations to renew the Customs Union treaty between Turkey and the EU will start at the second half of the year.