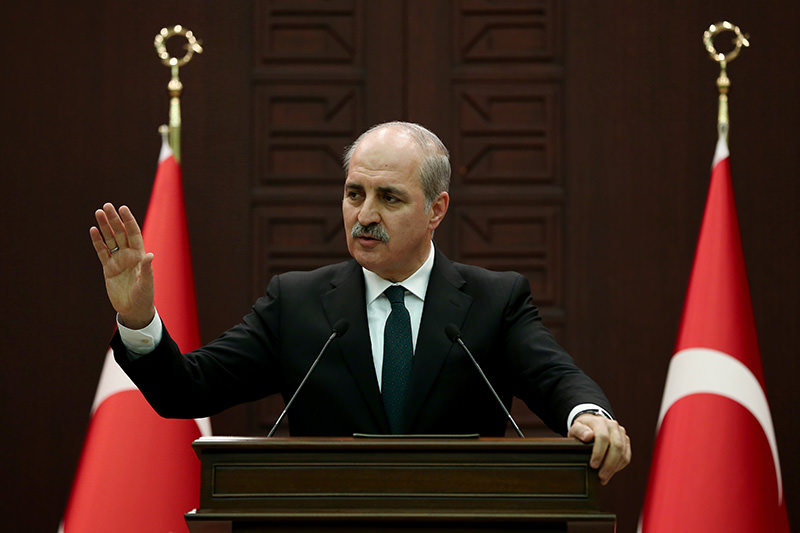 by daily sabah
Jan 25, 2016 12:00 am
The opposition side in the Syria talks should be formed out of groups in clear opposition to the Assad regime, Turkey's Goverment Spokesperson Numan Kurtulmuş said on Monday following the weekly cabinet meeting.

Kurtulmuş underlined that the Assad regime was or has been in cooperation with the YPG and Daesh in Syria since the civil war began, and such organizations should not be represented within the opposition side.

Separately, Foreign Minister Mevlüt Çavuşoğlu said on Monday that efforts to include terror groups like the YPG militia [affiliated with the PKK] among the opposition in Syrian peace talks was very dangerous and would undermine the process.

But European Union foreign policy chief Federica Mogherini, who spoke to reporters alongside Çavuşoğlu, said that, "from the European perspective, we attach an extremely high value on the fact that the process in Geneva will be inclusive."

The situation of Bayırbucak Turkmens in northern Syria -- who are under relentless attacks by Russian jets and regime forces -- was also discussed in the cabinet meeting, Kurtulmuş said on Monday.

Russia has been bombing villages in the Bayırbucak Turkmen area in northern Syria to bolster the Damascus regime, which it has been a staunch ally of since the beginning of the crisis. Turkish officials are alarmed with these intensified airstrikes on the Turkmen-populated region, which was previously under the control of moderate Syrian opposition groups.

Turkmens are a Turkic ethnic group based largely in Syria and Iraq, where they live alongside large Arab and Kurdish populations. The Turkmen community, which includes both Sunni and Shia Muslims, share close cultural ties with Turkish people.

The government spokesperson Monday also touched upon the terrorism issue in the country's southeastern region.

He said, life in the southeastern Silopi district -- where curfews were lifted partially last week-- is back to normal, emphasizing that the rehabilitation process in the region has started. According to previous reports, a delegation from the Environment and Urbanization Ministry is expected to visit the district soon and make assessments to overcome the damage following the clashes between security forces and PKK terrorists.

The 35 day-long counterterror operations concluded successfully last week, and media previously reported that 535 barricades were removed and 270 ditches dug by the PKK were filled.

Kurtulmuş also touched upon the education services which were stopped in some of the cities under curfew due to terrorism. He said, the Ministry of Education would provide remedial teaching to students starting from today until February 5 in cities where education services were halted.