FM Çavuşoğlu: If PYD is invited to Syria peace talks, Turkey will boycott the meetings 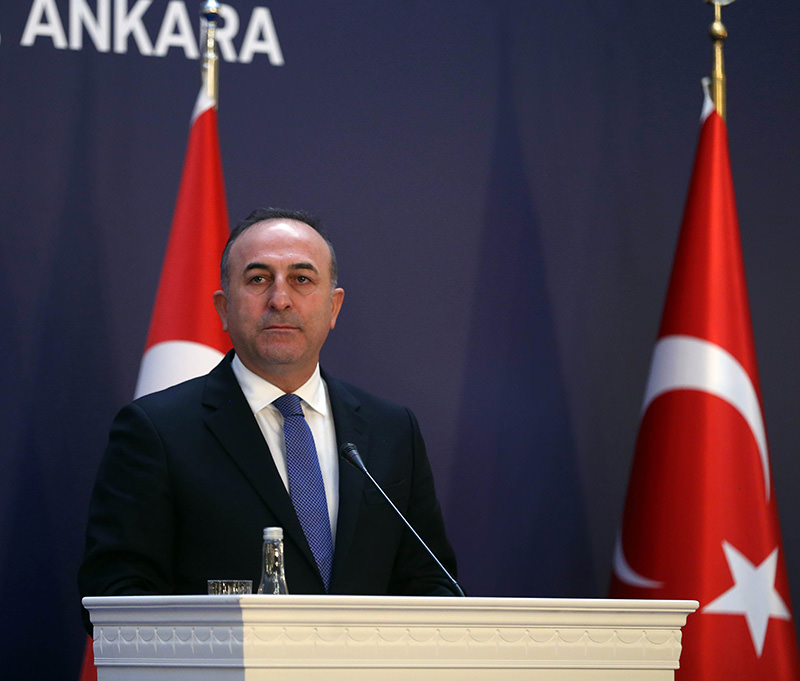 Foreign Minister Mevlüt Çavuşoğlu said late Tuesday that Turkey was promised that the PKK-affiliate Democratic Union Party (PYD) would not attend the Syria talks beginning in Geneva on Friday and the Turkish government would definitely consider boycotting the meeting in Geneva if this pledge was not kept. Çavuşoğlu's tough remarks came as the United Nations envoy Staffan de Mistura found an intermediate solution by inviting the representatives of the Kurdish group called Syrian Democratic Assembly (SDA). Çavuşoğlu, speaking on NTV news channel, said the PYD was a terrorist group and that the legitimate Syrian opposition had no intention of sitting side by side with its representatives.

Diplomatic sources reported Tuesday afternoon that U.N. officials had invited SDA representatives Îlham Ehmed and Heysem Menna to participate in the Geneva talks, which were postponed to Friday. The SDA is considered an umbrella organization of Syrian Kurds, including the PKK-affiliated PYD. PYD leader Salih Muslim stated earlier on Tuesday that the PYD expects to be invited to peace talks planned later this week in Geneva, however, the U.N.'s invitation did not directly address the PYD and leader Muslim.

Prime Minister Ahmet Davutoğlu said Tuesday at a Justice and Development Party (AK Party) parliamentary group meeting in Ankara that Turkey is opposed to the participation by the PYD in the Syria talks in Geneva. Davutoğlu said Turkey saw no difference between the PKK and its representatives in Syria, the PYD and its armed People's Protection Units (YPG). Diplomatic sources in Ankara said Turkey was against the PYD's active participation in the talks in Geneva.

"We believe that regarding Syria, there should be a table at which Kurds, Arabs, Turkmens, Sunnis, Alawites and Christians sit altogether. The inclusion of Kurds at the table is a necessity; a table that leaves out Kurds is incomplete. But we are definitely against the YPG, which is oppressing Kurds themselves, from sitting at the table," Davutoğlu said. Davutoğlu added that if the PYD is to join the talks aimed at resolving the five-year Syrian civil war, they should sit on the same side as Syrian President Bashar Assad, since they cooperate.

Russian Foreign Minister Sergei Lavrov, however, insisted Tuesday that the U.N.-backed Syria talks will not be successful if Kurdish representatives from the PYD were not invited. "Without this party, without this participant, the talks cannot achieve the results that we want: A definitive political resolution in Syria," Lavrov told journalists at a press conference.

Speaking to CNN's Christiane Amanpour on Monday evening, Davutoğlu said Syrian Kurds need to be part of the peace process to end the civil war, but those who treat the PYD and YPG as legitimate partners "do not live in the reality of the region."

Davutoğlu held firm to his belief that the Syrian crisis would not be resolved as long as Assad remains in power, adding that regime forces are "not winning."

Regarding Russia's role in the conflict, Davutoğlu said that Russia has been intervening "in a very negative manner; in fact, occupying Syria."

As one of the five permanent members of the U.N. Security Council, Russia can, "like others, contribute to the peace process," he said, "but we expect Russia to respect Syrian civilians and ... to not push Syrian civilians towards the Turkish border." Davutoğlu asserted that 90 percent of Russian airstrikes in Syria have targeted civilians and moderate opposition groups, as well as schools and hospitals.

"We reiterate the accuracy of this information because all those who were injured during the Russian bombardments in Syria are fleeing to Turkey," he said, adding that, "Only 10 percent of Russian airstrikes are against DAESH."

More than 1,000 civilians have been killed by Russian airstrikes which began on Sept. 30 in an attempt to support regime forces, according to the U.K.-based Syrian Observatory of Human Rights.
In early December, Syrian opposition groups held a meeting in Riyadh, Saudi Arabia to define their position ahead of the Geneva talks. The PYD and their affiliated militia group YPG were not invited to the meeting, due to their cooperation with the forces of the Assad regime.

U.S. Secretary of State John Kerry is dismissing reports that he threatened to stop support to the Syrian opposition if it doesn't show up for peace talks, scheduled to start this week. President of the Syrian Coalition Khaled Khoja said on Monday that talks between U.S. Secretary of State John Kerry and the High Negotiations Committee did not result in anything. Khoja added that these talks just delivered messages similar to those suggested by Iran and Russia. He added that Russia and Iran continue to interfere in order to disrupt the High Negotiations Committee.

The civil war in Syria, which will enter its sixth year in March, has left more than 250,000 victims dead, causing the warn-torn country to become the world's single largest source of refugees and displaced persons, according to figures from the U.N.