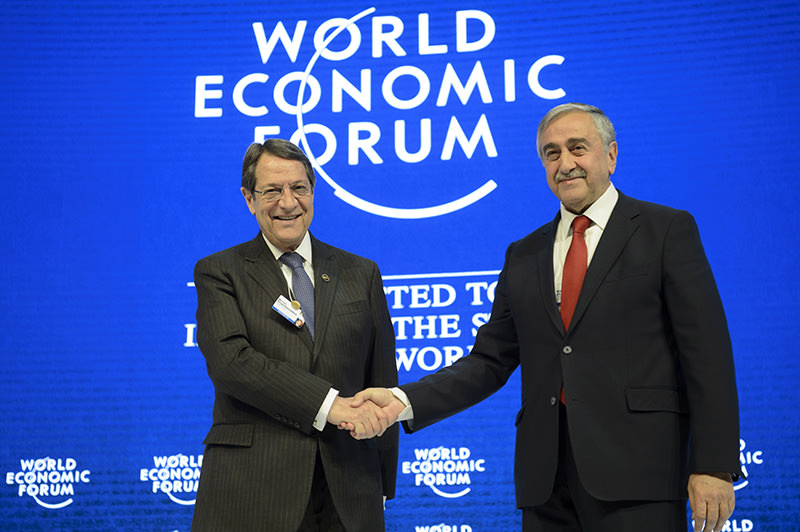 by Daily Sabah with Agencies Feb 02, 2016 12:00 am
The details of negotiations between Turkish and Greek Cyprus over the reunification of the island, which had been conducted in secrecy so far to avoid high expectations and opposition, has been revealed by ruling Democratic Party (DISY) officials who leaked a document to the press that was handed out by Greek Cypriot President Nicos Anastasiades.

The document covers the detailed conduct of the negotiations and the remaining obstacles ahead of a solution that was presented to U.N. Secretary-General Ban Ki-moon by Anastasiades at a meeting in Davos, which was also attended by Turkish Cypriot President Mustafa Akıncı.

At the National Council meeting on Monday, the document was handed to party officials on the condition of not making it public. However, the document made the headlines of Greek Cypriot newspapers on Tuesday, with some of them publishing the entire document.

According to the document, which was made available in Turkish by private broadcaster NTV, the two parties still have deep disagreements over key issues and how to proceed in negotiations.

Stating that the two parties have reached a consensus on key subjects in many issues, including administration, authority sharing, property rights, economy and European Union relations, the document says that there are still disagreements on various issues.

The Cyprus News Agency reported Tuesday that Nikos Christodoulides, a government spokesman, said, "Leaking the documents undermines the credibility of Anastasiades … and the negotiating power of the Greek Cypriot community."

The government will also revise its decision to hand out the documents, Christodoulides said.

The document lists the undiscussed and conflicting issues as property and related border arrangements, security and guaranteeing rights, the timetable for the removal of Turkish troops stationed on the island, the timetable for putting the issues agreed on into practice, when a possible agreement will enter into effect, the constitution and federal laws, the structure and constitution of federal states and an international agreement that would have binding effect on a reunified Cyprus.

Even if a consensus is reached on the issues mentioned above, the document stresses that time and careful planning are needed to implement the solutions agreed to by both parties, along with the costs of resettlements, compensations and the establishment of federal state institutions.

The International Monetary Fund (IMF) and World Bank started efforts to give the required technical information over funding by donations and required loans, the document says, and provide economic sustainability to a possible solution is of vital importance.

Regarding the conduct of the negotiations, the document says that the parties do not agree on arbitration by Ban, taking past experiences from the 2004 Annan Plan into consideration.

The document says that meticulous work, which could take months, is needed to avoid deficiencies in a possible solution and its practice, which would also undermine a positive result in a future referendum. Anastasiades confirmed to Ban that to ensure that an agreement is reached in 2016 in the fastest manner, he and Akıncı would work together.

NTV quoted Greek Cypriot daily Fileleftheros that Anastasiades's expectations for the first day of a possible solution is the withdrawal of Turkish troops and the immediate return of the closed Varosha (Maraş) area, buffer zone and zones closed to settlement.
Last Update: Feb 03, 2016 2:13 pm
RELATED TOPICS