Turkey-Syria border nears to be Daesh-free, US Secretary of State Kerry says 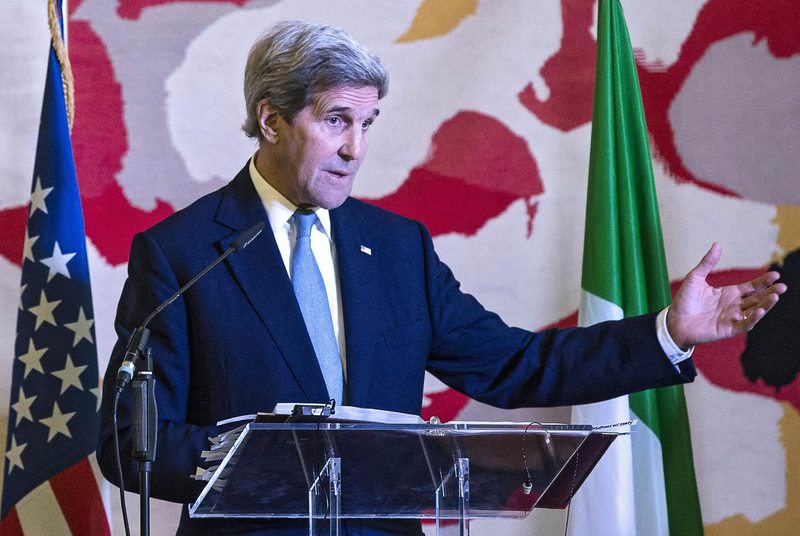 by Mehmet Çelik Feb 03, 2016 12:00 am
United States Secretary of State John Kerry said on Tuesday, during a press conference at the anti-DAESH coalition meeting in Rome, that the U.S.-led coalition has conducted over 10,000 airstrikes against the DAESH terrorist group in Syria, which have crushed the terrorist's financial mechanisms and oil refineries, and that the coalition has nearly full control over the Syria-Turkey border.

"Since coming together, we've launched almost 10,000 airstrikes. We've killed more than 90 mid-level or high-level leaders of DAESH since last May. We are closing in on full control of the Syria-Turkey border," Kerry said.

Kerry's comments were made during a joint press conference with Italian Foreign Minister Paolo Gentiloni.

Commenting on the effectiveness of the airstrikes against DAESH logistics facilities, Kerry said, "We are hammering DAESH heavy weapons, their training camps, their oil fields, supply routes, cache sites, infrastructure. Just last week we learned they had to cut pay to their fighters by 50 percent."

'Starvation as a tactic of war used by Assad regime'

Speaking on the tragic treatment of civilians in the Syrian town of Madaya, who have been left to starve by the Assad regime and their Hezbollah proxies, Kerry said: "The situation on the ground for the Syrian people is unfathomable. We haven't seen a catastrophe like this since World War II, and it's unfolding before our eyes. People in Madaya are eating leaves and grass or animals of one kind or another that they managed to capture. People have not had any resupply for months. The United Nations has made 113 requests to provide supplies, and only 13 have been granted by the Assad regime."

"Starvation as a tactic of war is against the laws of war, and it is being used every single day as a tactic by the Assad regime," Kerry added.

Gentiloni said that although there have been effective strikes against DAESH, their activities should not be underestimated.

"We should be even more wary and watchful, because we know that the more that DAESH is squeezed in its core territory, the more they are tempted to pursue terrorist activities elsewhere by targeting other countries, and we are witnessing renewed activity in Libya and sub-Saharan Africa, both directly and through affiliates, or by looking to strike inside our own countries," Gentiloni said.

Meanwhile, Kerry also said that the Syrian crisis and DAESH terror activities have had effects in the broader region, as well as on the religion of Islam.

"The impact of this crisis on Jordan, on Lebanon, on Turkey, on the region, throughout the Horn of Africa, throughout all of the Arabian, South Central Asia and the world – this narrative, which is a false narrative about Islam, a false narrative about legitimacy, about a state – requires every single one of us to get this job done as fast as we can."
Last Update: Feb 03, 2016 2:16 pm
RELATED TOPICS