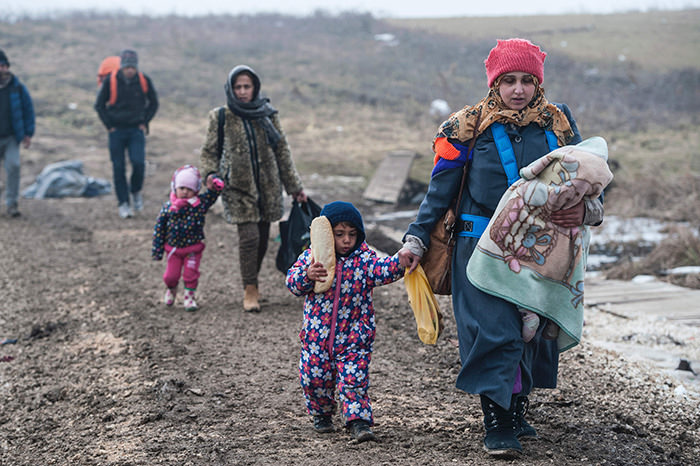 Migrants and refugees walk near the village of Miratovac after crossing into Serbia via the Macedonian border on January 27, 2016 (AFP Photo)
by Anadolu Agency Feb 04, 2016 12:00 am
Leaders of governments, NGOs and the members of civil society will meet in London on Thursday to raise more funds in aid of those affected by the crisis in Syria.

The one-day Syrian Donors Conference -- jointly hosted by Britain, Germany, Norway, Kuwait and the United Nations -- was called late last year after calls were made for governments and international bodies to work better together to solve protracted crises.

During the talks, which will be opened by U.K. Prime Minister David Cameron, participants will be urged to raise new funding for those affected by the Syrian civil war -- a crisis that includes Syria's neighbors as well as the conflict zone.

The conference will also consider ways to create job and education opportunities for those people forced away from their homes.

Turkey -- a key country hosting more than 2 million refugees from the conflict in Syria -- will be represented at the event by Prime Minister Ahmet Davutoğlu.

For the U.K.'s International Development Secretary Justine Greening, the conference is an "historic opportunity" to draw potential donors under one roof.

She told a Syrian civil society meeting in central London on Wednesday afternoon: "What we have done so far just isn't enough. So this conference can and must galvanize significant new funding from around the world to not just meet the immediate needs of people caught up in this crisis, but to meet the longer term needs as well."

Among those attending Thursday's conference will be David Miliband, the former U.K. foreign secretary who now leads the International Rescue Committee, a crisis-response organization.

"The purpose of this conference, which I think is well-founded, is to say you cannot have a sustainable humanitarian response that is only social services, there has got to be an economic offer both to the countries and to the refugees," he said in a speech in London on Wednesday.

But he said the very fact donors are being invited to an aid relief conference that is separate from efforts to end the fighting is a demonstration of how divided the world's powerful nations have become over the Syrian issue.

Non-governmental organizations like International Rescue, he said, have to depend on the government funding they receive for specific projects.

"When nation-states and the powerful ones are as divided as they are, [then] frankly as the NGO community we have to work with the hand we're dealt," he said. "It's a difficult hand. It's dangerous for our staff, it's very difficult for our planners and our team. And frankly the needs are growing faster than the efforts to meet them."

Miliband added: "To be absolutely blunt, the progress that is going to be made in the conference is going to be essential, but the hardest things [are] the problems inside Syria, the war and the abuse that's going on."

Thursday's conference is separate from the Syrian peace talks, known as Geneva III. Talks in the Swiss city have floundered since they began at the weekend.

But some Syrian groups in the U.K. have expressed hope that separating funding matters from political talks could yield results.

"Given that the London conference will be running almost simultaneously with the ongoing Geneva III talks [The UN suspended peace talks on Wednesday], we strongly hope that they will be seen as two complementary processes. Humanitarian efforts for Syria must be accompanied by a guarantee for civilian protection and a comprehensive solution to this brutal conflict," said Yasmine Nahlawi, of Manchester-based Syrian community organization Rethink Rebuild.

She told Anadolu Agency: "We expect that the participation of Syrian civil society organizations in the London conference will translate into Syrian leadership in the identification of funding priorities and in the subsequent implementation of projects on the ground."
Last Update: Feb 04, 2016 9:33 am
RELATED TOPICS