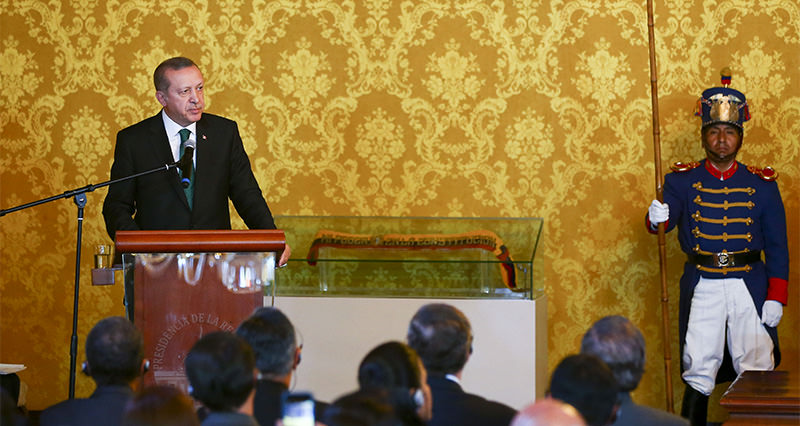 |AA Photo
by Daily Sabah Feb 04, 2016 12:00 am
President Recep Tayyip Erdoğan said Thursday that stopping the refugee flow is not possible without a halt to the continued airstrikes by Russia and the Assad regime against Syrian civilians.

Speaking in a press conference with Ecuadorian counterpart Rafael Correa, Erdoğan commented on the suspension of the peace talks until Feb. 25 and said thousands of civilians were headed toward Turkey following the airstrikes on Aleppo while the talks in Geneva were underway. "Our European friends want us to stop the refugee flow, is there any other choice for civilians in Aleppo but to flee when they are under Russia's heavy bombardment?" Erdoğan said. The president added that it is not possible to block the refugee flow or reach a political solution in Geneva without stopping the airstrikes against civilians.

Erdoğan stated that overcoming different problems and facilitating peace and security in the region is impossible without finding a solution to the Syrian crisis.

He said those who do not contribute to a solution in Syria are responsible for the tragedy of refugees in the Aegean Sea, adding, "As Turkey, we will continue to stand with all oppressed people, either arriving at our borders, or living in their homelands, and share our conditions."

The president stressed that setting a real political transition period is the only solution, saying, "It is impossible to solve the refugee problem while half of the Syrian population are displaced. Without reconstructing this state, which has become an area of activity of many terrorist organizations in terms of politics and institution, security problems cannot be removed. If an achievement is sought for efforts for a political solution in Syria, having a more principled attitude and inviting the opposition into the process with a just approach is a must."

Erdoğan also highlighted that Turkey needs to act more responsibly in protecting its borders and sovereignty rights in this atmosphere and said: "We invite the international community to put a more serious reaction against countries that support organizations and regimes using terror methods in the region for their interests."

He also indicated that it is only Turkey that opened its borders for 2.7 million refugees and said the inhuman attitudes of those who do not give any support to efforts in this problem is concerning. "There is not another country in the world that opened its borders to 2.7 million people and prepared all their living conditions; there is only Turkey."
Last Update: Feb 05, 2016 8:11 pm
RELATED TOPICS