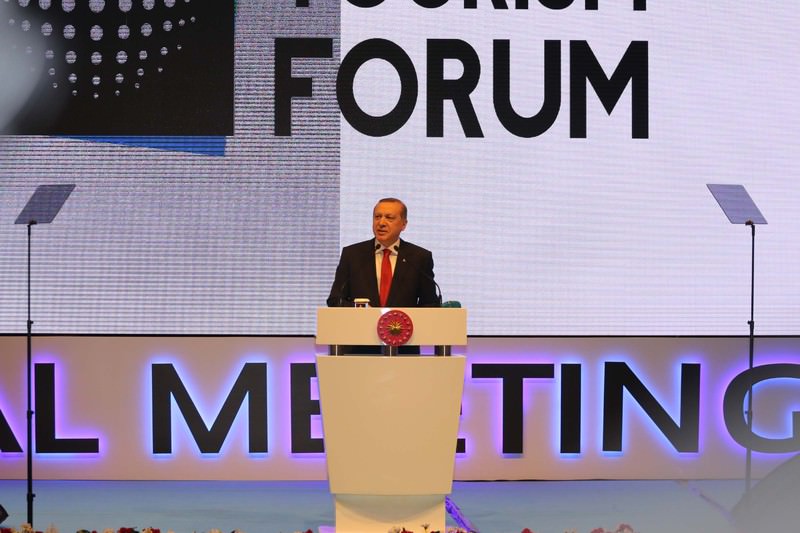 In the closing speech of the World Tourism Forum in Istanbul, Erdoğan said that certain terrorist groups' actions in Iraq and in Syria, such as the PYD, were being ignored.

"The PYD, controlled by the Qandil Mountain [where the PKK has established its headquarters since it retreated from Turkey] is supported and defended [by western powers that] ignore the YPG's ethnic cleansing activities in the region, terrorist actions, [and] cooperation with the current regime," said Erdoğan.

The president said that the targets of the PYD -- and its armed wing the YPG -- include everyone who did not think like them and join their group.

In an October report, Amnesty International stated that the YPG had committed several war crimes while fighting Daesh militants.

The rights watchdog went on to assert that thousands of local residents had recently been forced to leave their homes -- while entire villages had been razed to the ground -- by YPG fighters.

He said that organizations such as the PKK, PYD, and the YPG as well as Daesh cannot reach success with their bloody attacks.

"We continue to struggle hand in hand, shoulder to shoulder with the Turkish army, Turkish police and our village guards, and will continue to do so," Erdoğan added.

The PKK -- also considered a terrorist organization by the U.S. and the EU -- resumed its 30-year armed campaign against the Turkish state in late July 2015.

Since then, more than 250 members of the security forces have been martyred and thousands of PKK terrorists killed in operations across Turkey and northern Iraq.

But the U.S. considers the PKK affiliate, PYD, "a reliable partner" in the fight against Daesh.