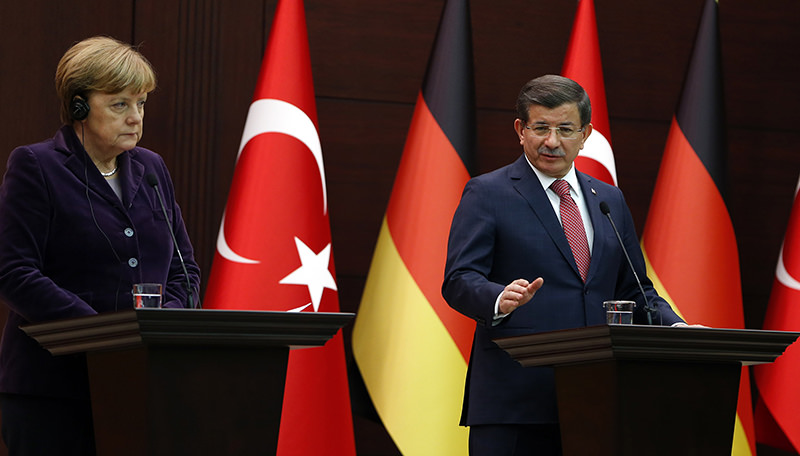 Prime Minister Ahmet Davutoğlu on Monday said that humanity is being tested in Syria, as tens of thousands of refugees are affected by the ongoing crisis, and said that joint efforts are necessary to deal with the issue.

Speaking in a joint press conference with German Chancellor Angela Merkel, Davutoğlu said that it is unreasonable for the world to expect Turkey to shoulder the refugee burden on its own, while he thanked Merkel for her efforts regarding the matter. He noted that at least 30,000 refugees fleeing the Russian-backed airstrikes on Aleppo are waiting at the Turkish border.

Davutoğlu said that the two countries have agreed on a set of steps to stem the flow of refugees from Syria, including a joint diplomatic initiative to stop the onslaught against Aleppo.

Meanwhile, Chancellor Merkel expressed that she is 'appalled and horrified' by the suffering caused by Russian airstrikes in Syria and noted that Turkey, and Germany are on the same page regarding humanitarian assistance for refugees.

"The aggression has to cease as quickly as possible," she said, and added that Russia's action contradict a United Nations resolution, which seeks to prevent attacks on civilians.

He also said that Germany and Turkey would carry out 'joint efforts' for greater NATO involvement in the crisis, by seeking the use of NATO's observation capabilities at the border with Syria and in the Aegean Sea.

The prime minister underscored the necessity of fighting human traffickers and said Turkey and Germany will increase joint efforts regarding the fight against human trafficking.

"We have always considered all types of human trafficking as a crime against humanity, as being equal to terrorism" Davutoğlu said, and added that it exploits people's expectations and hopes. He referred to the two boats carrying refugees, which had sunk on Monday as they were attempting to reach Greece, killing over 30 people.

Davutoğlu said that Turkey will inform Brussels next week on which projects would take funds from the three billion Euro refugee package.

In a previous meeting, Merkel and Davutoğlu agreed on lifting visa requirements for Turkish nationals visiting the Schengen area by October in return for Turkey's help in stemming the flow of refugees to Europe.

Germany and Turkey have emerged as crucial players in the biggest migration crisis to rock Europe since World War II.

On Thursday, world leaders pledged to give over $10 billion in aid to help fund schools, shelter and jobs for refugees from Syria.