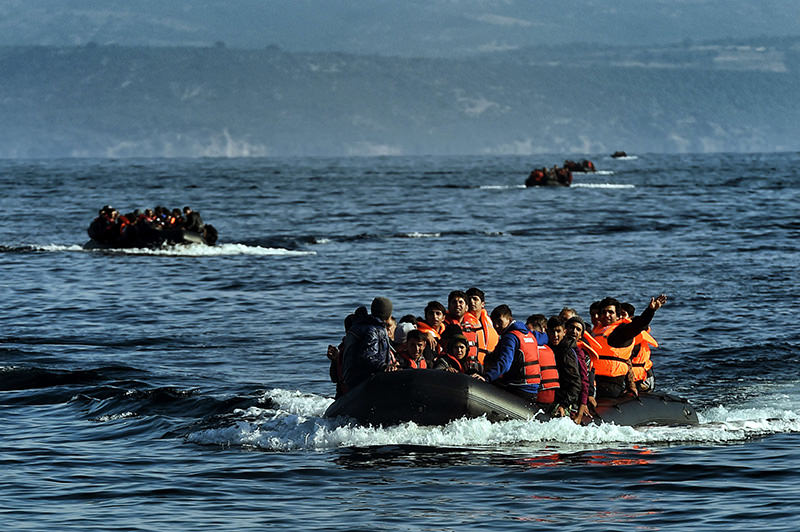 Refugees aboard dinghies reach the Greek island of Lesbos after crossing the Aegean sea from Turkey on October 4, 2015 (AFP)
by Daily Sabah with Wires Feb 11, 2016 12:00 am
NATO joined efforts to combat human trafficking between Turkey and Greece on Thursday, agreeing to send ships to the Aegean after a request for help was voiced from Turkey, Germany and Greece.

Secretary General Jens Stoltenberg said the vessels would not be "stopping or pushing back refugee boats" but would provide information and surveillance to help counter the gangs that are smuggling refugees into Europe by sea.

NATO's response comes on the heels of requests from Turkey, Greece and Germany for assistance.

"This is about helping Greece, Turkey and the EU with stemming the flow of migrants and refugees and coping with the situation and manage a human tragedy in a better way," he told reporters in Brussels following a meeting of NATO defense ministers.

Stating that the considerations are currently ongoing, he said: "We are now considering the requests for NATO support for coping with the migrant and refugee crisis. And we are of course doing that in very close dialogue with the allies which are most affected and there are consultations and discussions going on now."

"I think it is obvious that when NATO allies request support to cope with such a great challenge and the human tragedy related to the migrant and refugee crisis which we see in the Middle East and North Africa but now also in Europe, then of course this is something we have to look very carefully into," he said.

Yet, Secretary General Stoltenberg refused to give a general description of requests, saying that now what they have to do is to work inside the alliance to address the request and the different proposals.
Pentagon chief Ashton Carter also said on Thursday that NATO is willing to support the tripartite request.

"NATO and all the parties at the table this morning indicated willingness for NATO to support and be a part of that operation," Carter said after a meeting with defense ministers at the alliance's headquarters in Brussels.

"All three of those countries emphasized the need for NATO to act quickly, with which the United States strongly agrees, because people's lives and destinies are at stake here."

Carter said military strategists will now look at the issue and report back to NATO for final approval.

German government sources said Thursday that the three countries wanted NATO to begin surveillance of the Aegean Sea to provide a "clear view" of how people smugglers are operating along the Turkish coast.

German Chancellor Angela Merkel visited Turkey on Monday, agreeing to make the request to the 28-nation alliance as thousands more refugees flee heavy fighting near the Syrian city of Aleppo.

Turkey is the main transit country for the more than one million migrants who reached Europe last year.

After arriving in Greece, most of the refugees have made their way north to Germany and other countries in the EU in what has become Europe's worst refugee crisis since World War II.

More than 70,000 made the dangerous crossing in January, which left more than 400 people dead, according to the International Organization for Migration (IOM).

The fear now is that hundreds of thousands more fatalities could result this year with no prospect of reaching a solution to the war in Syria which has killed more than 260,000 people and displaced half of the Syrian population since March 2011.