'Germany acts as an intermediary between Turkey and Russia' 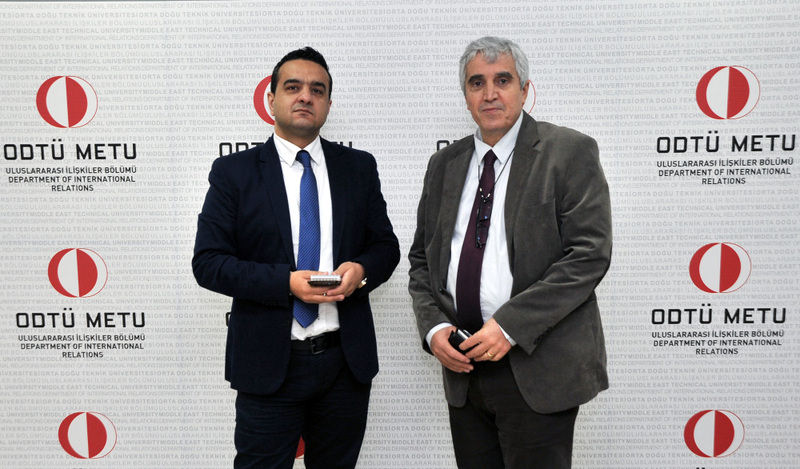 Professor Bağcı of Ankara's METU says that the recent improvement in Turkish-German relations will not cease quickly and the two countries will restructure the region together. He also contends that Germany acts as an intermediary between Turkey and Russia

NATO's patrolling to prevent human trafficking in the Aegean Sea, as proposed, jointly by Turkey and Germany, the extent of NATO's future involvement in Syria, and Turkey's military intervention to Syria were topics headlining the agenda when German Chancellor Angela Merkel visited Ankara.

Professor Hüseyin Bağcı, an expert on Turkish foreign policy and NATO, who lectures at Middle East Technical University (METU), said that NATO's patrolling in the Aegean Sea was a positive outcome, while stating that Turkey's military intervention into Syria was highly unlikely.

The 52nd Munich Security Conference was held last week. The main subjects of discussions were the Syrian civil war and the immigrant crisis, which is now the most prominent issue of Europe. What are your observations regarding this conference?

As an academic who has participated in this conference many times, I can say that the most important feature of the Munich Security Conferences is the discussion over world politics with high-level participants. Turkey used to be represented by its defense minister. However, since Prime Minister Ahmet Davutoğlu formerly headed the ministry of foreign affairs, Turkey was represented by Foreign Minister Mevlüt Çavuşoğlu.

Regarding the discussed subjects, as you have said, Syria was the most prominent. After the meeting of foreign ministers, we observed that there weren't any concrete decisions. Russia proposed that a cease-fire should be declared on March 1; however, it was not found realistic. Russia's seems intent on regaining Aleppo and its vicinity before March 1, namely the territories which were lost by Syrian leader Bashar Assad. It is obvious that DAESH is not a priority for Russia.

As the country most affected by the Syrian crisis, Turkey is facing a new wave of refugees, and recent statements indicate that Turkey is to change its open door policy. I believe that Turkey should not open its borders to refugees without controls, and that demanding the U.N. deliver aid within Syria, are solid and correct decisions.

Do you believe the criticism from President Erdoğan and Prime Minister Davutoğlu's towards those European leaders who suggested Turkey open its borders to the refugees is correct?

I believe there is a shift from wrong to the right. In my opinion, the open door policy was wrong – a miscalculation, to be precise, due to an unpredictable wave of refugees. Currently there are efforts to correct this mistake. The point I want to emphasize is that the refugee crisis which goes against Turkey's interests has been transforming into leverage in Turkey's negotiations with European countries.

European countries are trying to reconcile with Assad and restructure Syria in order to prevent the influx of refugees. This means that they will establish a mechanism to send refugees back to Syria as soon a resolution is achieved. It will be a reverse migration policy. Turkey currently supports a policy insistent on Assad's resignation. I believe that Turkey may change this policy, in accordance to the shifting power balance. As a matter of fact, after seeing President Recep Tayyip Erdoğan accepting Israeli lobbyists, I think a change in policy is also possible.

How do you regard the chance of Turkey's military intervention to Syria?

It is highly unlikely. It is impossible for Turkey to organize a military operation in Syria. As you know, this decision can only be made by the parliament and the missions which were extended by the government last October prevent such an operation. Turkey can only carry out a military intervention within an international coalition. Turkey needs a legitimate reason to enter another country's territory as a regional power, which could only happen if there is an absolute threat towards Turkey, which is currently non-existent.

Couldn't a new wave of refugees be classified as an absolute threat towards Turkey?

A new wave of refugees cannot be classified as a legitimate reason for operations and war. Turkey has the right to stop the new refugees at the borders. This is not a problem; however, if Turkey enters into Syria to prevent the refugees, it can be considered as invading a country. As Syria is still a member of the U.N., it is still a sovereign country which preserves its territorial integrity. Regarding international law, Assad is a leader who is trying to regain control of lost territories. That Assad has permitted Russia into Syria is to protect its territorial integrity, in this sense. If Turkey crosses the border into Syria without an official permit from the Damascus government, this decision will have no international legitimacy.

If Turkey, a NATO member, intervenes in Syria, would Russia and Turkey face each other?

Of course, a conflict between Turkey and Russia would mean all of us searching for a new country to settle in. If you are going to go against Russia, you have to think it through. Throughout our history, we have fought with Russia thirteen times; we know them and they know us. I do not think that the leadership in Turkey would resort to conflict with Russia.

There are some discussions about some Western countries wanting to exclude Turkey from NATO. Technically, it is not possible. A NATO member country can only leave NATO willingly, as the decisions are taken with a consensus of 28 countries. Turkey does not have such a demand, and I do not believe it will ever have.

How do you regard NATO patrols in the Aegean Sea to prevent human traffickers?

It is a righteous decision. There are some non-duty interventions, which occurred in Somalia. However, regarding Turkey's example, Turkey's waters are also considered as NATO's waters. Therefore this is different. There is a common problem. The most prominent aspect is that Turkey being supported by both the EU and NATO. Turkey has started to proactively use these mechanisms.

Isn't there a transformation in NATO? How can a union which was formed according to the Warsaw pact during the Cold War be competent in modern security issues?

These discussions about NATO becoming a global organization started in the early 2000s. The time period of 2001-2005 was very significant. Currently, NATO does not want to participate in many global interventions.

Doesn't the invasion of Crimea by Russia, an active threat of Russia in the Baltic region and the events in Syria bring to mind the question of how efficient would NATO be in protecting us against Russia?

All of the Baltic countries, including Norway, Sweden and Finland, are restless, as Russia keeps violating their airspace and they are not able to intervene. Especially after the invasion of Crimea, they are really anxious. I cannot say that NATO assures the people living there.

There is an increased frequency in visit and contact traffic between Turkey and Germany, especially after the refugee crisis. How do you evaluate this?

What will these close relations between Turkey and Germany transform into? Is there another dimension in the making or is this all temporary?

Germany is normally the country which advocates for Turkey in Europe. However, since Merkel's rise to power, there has been certain coldness between the two countries. Merkel has now begun to understand the importance of Turkey.

Therefore, the contacts and visits which originally were due to the refugee crisis has transformed into a golden opportunity for Turkey. It has contributed to the opening of new chapters in the EU accession of Turkey. Turkey has to utilize this opportunity well.

Then you believe this closeness is not temporary?

Yes, I believe that the common problems which emerged alongside the refugee crisis have become permanent. Turkey and Germany have a chance to have closer relations than ever.

How will this closeness affect the Middle East?

Germany is very cautious regarding the issue of restructuring the Middle East. For example, the embassy in Berlin of the Damascus administration has not been shut down. Germany always acts as a soft power in the Middle East, instead of as a military power. When conflicts cease, Turkish and German companies will work together. I believe Turkey should use this opportunity very well.

The normalization between Turkey and Israel continues. It seems a third way will be proposed regarding the Gaza Strip and the negotiations will probably end well. Do you think that the normalization will also affect the politics in the Middle East, or will it only stay as cooperation in energy and economy?

It is not possible for it to stay as only economic cooperation, as those are currently good. It will definitely have a political impact. Quoting Alan Makovsky, I would say "If Israel is the child of the U.S. in the Middle East, Turkey is its best friend." It has always been this way, since 1949. Turkey was one of the first countries to recognize Israel as a sovereign state.

Even after the "one minute" incident in 2009, I have said that there is not an anti-Semitic tradition in Turkey. There is opposition against the state of Israel. Even before President Erdoğan, Former Turkish Prime Minister Bülent Ecevit also called Israel a "murdering state." Thus the state's policies can be criticized; however, a systematic aversion to Israel and Jews has never existed in Turkey.

We have to take our lessons from bad experiences and accordingly determine the correct policies for the future. The reconciliation between Turkey and Israel is natural, as we never did have a policy conflict with Israel in the classical sense. In the Islam Conference of 1997, Iran brought forwards a significant proposition which was against Israel. Süleyman Demirel, president of Turkey at that time, left the conference, stating that he would not approve this proposition. After the proposition was dismissed, he returned to the conference. Since the establishment of the Organization of the Islamic Conference, Turkey has never signed a decision which was against Israel.
RELATED TOPICS