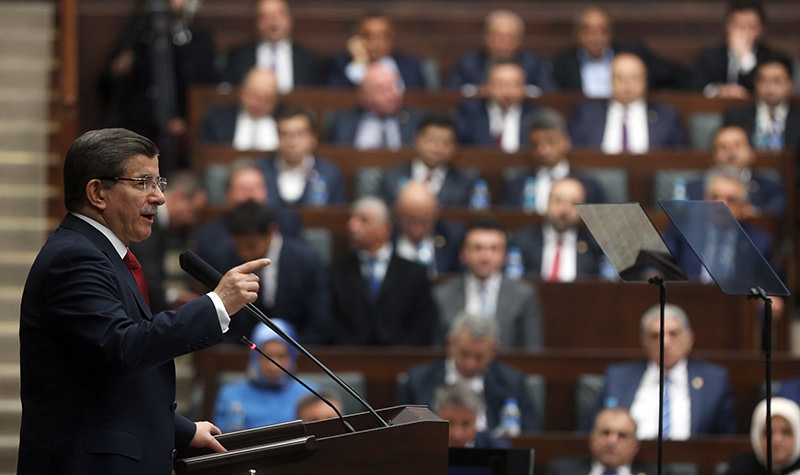 Describing Russian offensives as ‘barbaric,’ PM Davutoğlu said that they have been indiscriminatingly killing civilians in Syria since they began in September and accused the PKK-linked PYD of acting as a puppet of Russia and the Assad regime

Prime Minister Ahmet Davutoğlu said on Tuesday during the ruling Justice and Development Party's (AK Party) weekly group meeting in Ankara that Turkey has been taking preventative steps to avoid entering the Syrian war despite Russia's blatant moves while speaking out against the indiscriminant Russian air campaign.

"Those vile, cruel and barbaric planes have made close to 8,000 airstrikes since Sept. 30 without any discrimination between civilians and soldiers, or children and the elderly," he said, denouncing the offensives as "barbaric."

Turkey will continue to take preventative measures to avoid becoming involved in the war in Syria, he said.

"There's an attempt to give the impression that Turkey is going to war in Syria; we have kept Turkey out of this war for five years," he said.

He harshly criticized Russia for its actions in Syria, saying the latest developments have come to a point that now threaten Turkey's national security.

Davutoğlu accused the PKK Syrian affiliate Democratic Union Party (PYD) of being "mercenaries" for Russia and acting as a "terror group" in the region along with DAESH.

"The PYD and DAESH are not the primary components of Syria," he said. "The PYD is not representative of Kurds, but Russia's mercenaries."

"The PYD is Russia's puppet, and it commits countless massacres on behalf of Russia and [Syrian leader Bashar] Assad's regime," Davutoğlu said.

He said that the Kurdish people are an integral part of the country: "The Kurds have a state and that state is the Republic of Turkey. Kurds are the owners of this land, we share history and culture."

He has also touched on Russia's request for the United Nations Security Council to discuss on Tuesday Turkey's shelling of the PYD's armed People's Protection Units (YPG) positions.

"Why is Russia complaining about Turkey to the U.N.? It is part of the P5+1, that's why we keep saying that the world is bigger than five," he said.

The Turkish military has returned fire "in kind" into Syria, military sources said on Tuesday, marking the fourth straight day of shelling by Turkey.

Turkey on Monday warned YPG and PYD militants in northern Syria they would face the "harshest reaction" if they tried to capture the town of Azaz near the Turkish border.
Last Update: Feb 16, 2016 4:18 pm
RELATED TOPICS