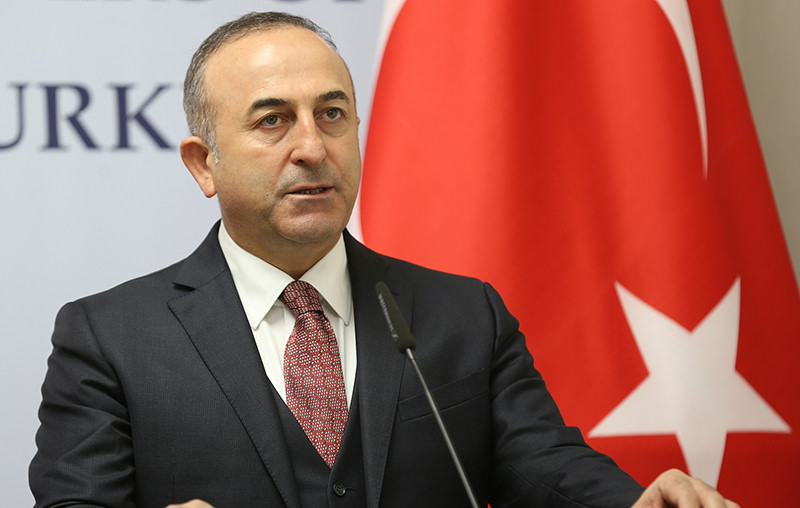 | AA Photo
by Daily Sabah with Agencies Feb 19, 2016 12:00 am
Foreign Minister Mevlüt Çavuşoğlu on Friday criticized the United States for making conflicting statements regarding the YPG/PYD and urged the U.S. to cut its ties with the terrorist group.

Çavuşoğlu's comments came during an official visit to Georgian capital Tbilisi, where he slammed the U.S. for cooperating with the YPG and PYD, which are affiliated with the PKK, recognized as a terrorist organization by Turkey, EU and the U.S.

"Resorting to terrorist groups like the YPG in the fight against Deash in Syria is above all a sign of weakness," Çavuşoğlu said and added that the U.S., which is Turkey's ally must immediately stop this mistake.

Çavuşoğlu also underscored that Turkey will contribute actively in fight against Daesh terrorists.

The foreign minister also noted that Turkey is "pleased" that U.S. Secretary of State John Kerry has described the Syrian-Kurdish YPG as untrustworthy.

On Thursday, Kerry called his Turkish counterpart to express condolences on the deaths of military personnel and civilians in Wednesday's terrorist attack in Ankara that killed at least 28 people wounded dozens more.

"Although conflicting statements are coming from the U.S., it is a significant development that they have started to understand this issue," Çavuşoğlu said.

Prime Minister Ahmet Davutoğlu and President Recep Tayyip Erdoğan on Thursday announced that the deadly attack, which has claimed 28 lives in the capital was carried out by a PYD/YPG suicide bomber from Syria in collaboration with the PKK terrorist organization.

The United States said it is not in a position to confirm or deny Turkey's charge and said that it 'has been careful to press the YPG/PYD and other Kurdish elements against Daesh militants and not to target Turkey.'