President Erdoğan arrives in Nigeria as part of west-Africa trip 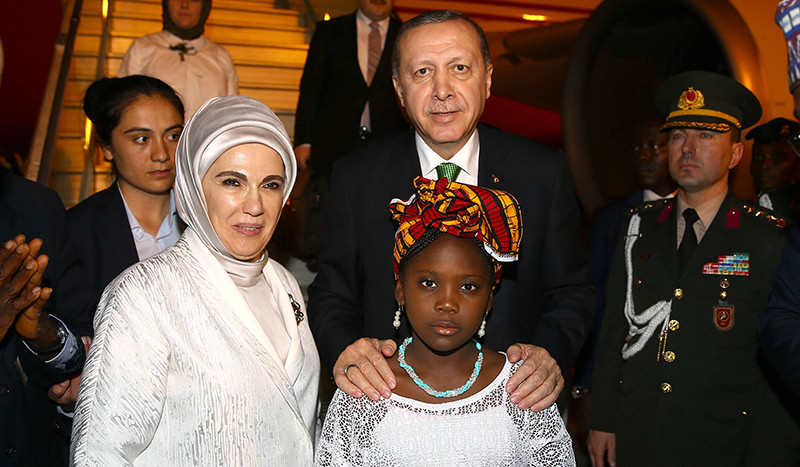 | AA Photo
by Daily Sabah with AA Mar 02, 2016 12:00 am
President Recep Tayyip Erdoğan arrived in Abuja, Nigeria late Tuesday on a one-day official visit where he is expected to meet with his counterpart Muhammadu Buhari and other local officials as part of his west Africa tour.

Erdoğan is on a four-nation tour of Africa that had seen him visit Ivory Coast on Monday and Ghana on Tuesday. He will leave Abuja late Wednesday for a visit to Guinea on Thursday.

Erdoğan's visit is apparently to deepen socioeconomic relations between the two countries, who are powerful members of the D-8, a bloc of developing nations formed in 1997. Bilateral diplomatic relations began in 1960.

The Turkey-Nigeria trade volume hit $2.3 billion in 2014, according to the Nigerian Association of Chambers of Commerce, Industry, Mines, and Agriculture. The two have bilateral trade agreements, including one on economic, scientific, and technical cooperation inked in 1986 and an investment promotion and protection agreement signed in 2011.

The Turkey-Nigeria Chamber of Commerce was founded in 1999. Their main areas of trade relations revolve around imports of clothing materials and automobile parts. Turkey, for its part, also imports raw materials from Nigeria such as rubber and sesame seeds.

Data from Turkey's Economy Ministry say Nigeria is its fifth-largest trade partner in Africa and second among sub-Saharan African countries.

Turkish investments in Nigeria are visible in the areas of construction, quarrying, textiles, tourism, education, healthcare, and hospitality.

Erdoğan is accompanied by his spouse Emine Erdoğan, over 150 Turkish businessmen, and many other Turkish officials.

Turkey has more than tripled the number of embassies it has in Africa since 2009 while flag carrier Turkish Airlines has dozens of destinations on the continent.