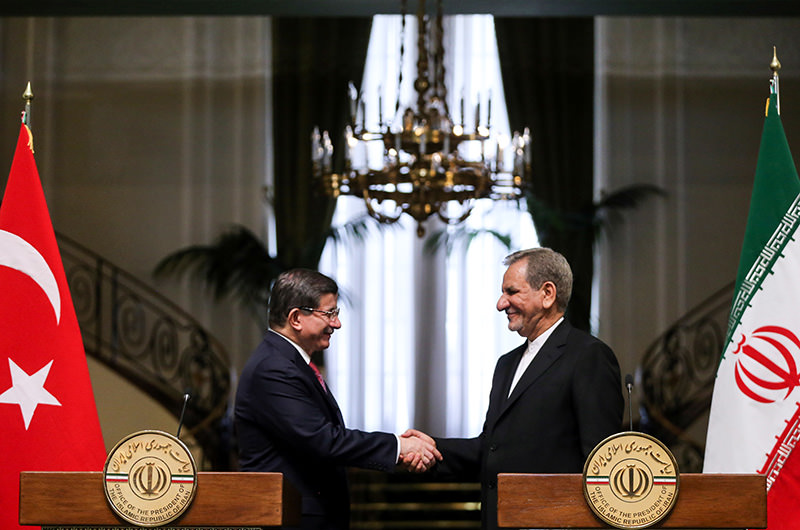 by Daily Sabah with Agencies Mar 05, 2016 12:00 am
Turkey and Iran need to develop a mutual perspective to overcome the instability, terror threat, ethnical and sectarian conflicts in the region, Prime Minister Ahmet Davutoğlu told Eshaq Jahangiri, First Vice President of Iran on Saturday in a joint press conference in Iran's capital Tehran.

Davutoğlu arrived in the Iranian capital Tehran on Saturday for talks on the Syrian civil war and the expansion of economic cooperation between Turkey and Iran.

Davutoğlu said that even though Turkey and Iran have different ideas on certain issues, it's impossible for the two countries to change their history and geography.

He underlined the rooted history of Turkish – Iranian relations and noted that important steps have been taken between Turkey and Iran on how the future will be shaped.

"We must not leave the solution of our region's problems to foreign actors," Davutoğlu said.

He added that the easing of Western sanctions on Iran over its nuclear programme means the two neighbors can easily exceed their previous trade target of $30 billion annually.

Prime Minister Davutoğlu is due to meet Iranian President Hassan Rouhani later on Saturday to discuss the latest developments in Syria.

He is also scheduled to talk with the Iranian Oil Ministry about working together on the Trans-Anatolian Natural Gas Pipeline (TANAP) project.

Turkey and Iran are at odds over the war in Syria: Iran is a key supporter of Syria's Assad regime, and Turkey is Assad's most outspoken critic.